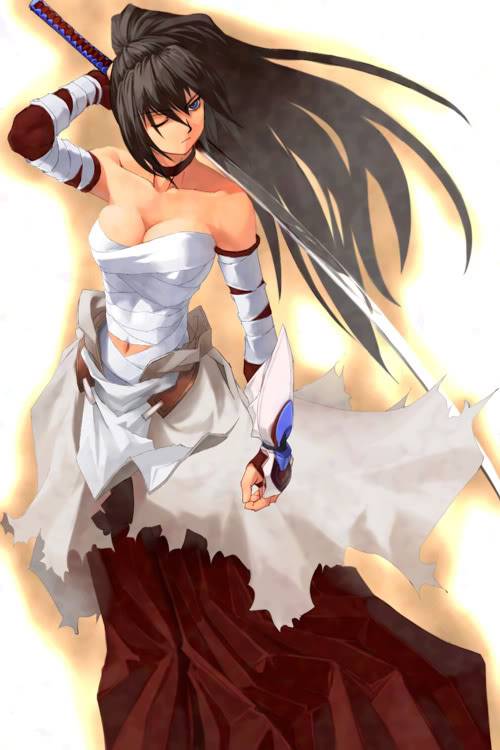 Personality: Kumiko will start off seeming very shy, and a calm and quiet girl, but once blood has been spewed she will go into bloodlust, she will lick it off the blood of her opponent off her blades, enjoying every drop of it, there is nothing she enjoys more than watching blood running down a person’s body, except for licking it off herself, and if a guy begins hitting on her, actually its the same wether its a girl or a guy, she will retaliate times a hundred. But other than that she is a calm and relaxed girl, she remembers nothing from her childhood or the fact that she once had a younger brother.

Fighting Style: Kumiko isn't afraid of a good fight, which also resembles in her choice of fighting style, she uses a mix of Muai Tai and Judo/wrestling, she loves using her elbows and knee's and isn't afraid of taking the fight to the ground if needed, she also loves to use a bone growing out from her knee and elbow when fighting like this.

Bloodline: Ossification
Ossification is the ability to mentally manipulate bones to change the density of bones, from hollowing bones like a bird, to making them as unbreakable as steel. A person with this ability can also make his bones more flexible, and less prone to breakages, aiding in the recovery from falls, and can knit bones back together at an accelerated rate. After practice, the user of this power can also use the ability to break bones in opponents, incapacitating them with broken legs, arms, ribs or even necks.

Name: Dance of the Camellia
Kumiko performs this jutsu by modifying the humerus (upper arm bone) of either his right or left arm to create a short, hilt-less bone sword. Since she can increase and compress the density of his bones, she can make the sword harder than steel. she then uses the sword to fight; her style uses quick cuts and thrusts to disable opponents quickly.


Name: Dance of the Larch
Kumiko uses this jutsu to create a mass of razor-sharp bone spikes all over her body. These spines appear to be branches off her pre-existing skeletal structure rather than completely new bones. Kumiko is even able to grow these bones at an extremely rapid rate so they can stab an opponent even as they are growing. She can even use them to block or trap an opponent's strikes. In addition to being an unwelcome surprise for opponents, it makes her basically untouchable at close range. If an opponent would start to get close to her, she would start to spin rapidly slashing the foe in multiple areas of their body.


Name: Dance of the Clematis: Vine
Using her kekkei genkai, Kumiko can modify and pull out her own spinal column to use as a flexible chain staff, regrowing a new spine to replace the removed one. The protrusions on the vertebra are modified to make them stronger and sharper

Name: Dance of the Seedling Fern
Kumiko’s final dance (presumably the strongest as a last resort), this jutsu causes a giant forest of bone spikes to burst from the ground. Kumiko is able to emerge from any bone at will, giving her a deadly element of surprise should the opponent be able to avoid the attack.

Name: Dance of the Willow
To perform this dance, Kumiko grows several long bone blades from her body for use as weapons. Though she primarily uses two blades grown from the palms of her hands, she also uses several secondary bones grown from her elbows, knees, and shoulders. This dance form is incredibly acrobatic, using spins, charges, and long sweeping slashes to make the strikes more effective and to evade opponents' counter strikes. Kumiko can also extend his bones to attack her opponents without having to adjust her own movement.

Name: Drilling Finger Bullets
Kumiko fires her fingertip bones at an opponent like bullets. Since she has regenerative bones, the rate of fire from her arsenal can become limitless. These bullets were unable to penetrate Gaara's Shield of Sand though they did severely dent it and nearly strike Gaara. The skin the bullets tear through to fire is also healed by the end of the technique.

Name: Calcium Erupter
Kumiko can if she is holding a firm hold on the opponent, use her Kekkei Genkai to make the bone Break, or if enough chakra is focused make it burst, She will have to be grapping that area, fx if you wonna break the ribs you have to grab him around that area with your hand.

Name: Bone Smith
Kumiko is able to manufacture pretty much anything out of her bones in her hands, and when finished it will release itself from the rest of the sceleton, she can create a simple spear if she wants too, but she can also create more complex things, such as a beautiful vase if she wanted too, but the more complexcity the longer it takes for her to create it.

Earth Release: Underground Projection Fish Technique
Using this jutsu, a person can hide underground until they're ready to attack an opponent. By utilizing earth-chakra, the person can stealthily emerge from the ground without disrupting the ground around him.

Doton • Shinjuu Zanshu no Jutsu is a Ninjutsu technique utilizing the Earth Element. The ninja will travel through the ground to appear below their target. They will then surprise their target by then pulling them into the ground. Once in the ground their target is thus immobilized.

Shunshin no Jutsu is a basic Ninjutsu technique. The ninja will appear and disappear in an instant, allowing them to retreat or attack suddenly. To facilitate the movement the ninja will often use nearby elements such as mist, sand or leaves to mask their appearance or disappearance.

Biography: It is a common mistake that Kimimaro was the last survivor of the clan, there was one more, and that was Kumiko, she was the older sister of Kimimaro, but her bloodline came alot later than Kimimaro and after seeing what had happened to him, she decided to hide it from her maniac father who loved fighting more than anything else, sadly this had been brought onto her aswell, so that when she sees blood she goes mental. Her father hated her, for her weakness, or well so he thought but he would frequently hit her for not bearing the powerful bloodline, she came to hate grown up men, but she kept on living a quiet life, except for the times when she would go out in the night to train her skills, which quickly became under her full control. Then the unfortunate day came, she saw her brother being released, she decided to leave this whole life behind, so in the night she ran off, deciding never to come back, but she was attacked by a group of thugs, without even forcing it, a bone was shot out of her elbow and stapped the ambusher in the arm, her bone blade was full of blood and she completely changed personality, she slowly licked off the blood and then looked with a hungry look in her eyes, she woke up later that day and saw 3 decapitated bodies, she remembered nothing of what happened before and it is hidden deep inside of her waiting for its reawakening. She kept on venturing through the lands as a missin nin, although there is no bounty for here, actually no one even knows of her existence, the entire was now whiped out along with her brother, who apparently this Gaara of the dessert had killed, and even though she couldn't remember anything in particular about her childhood, she knew that she had to avenge her killed brother and make this Gaara person pay for it