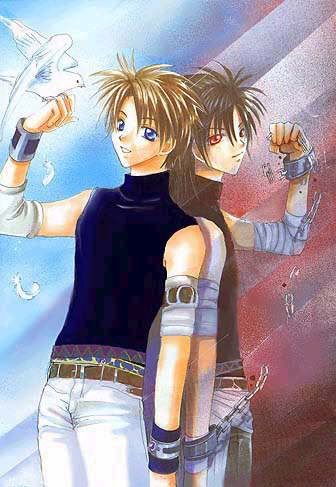 Biography:
Sakuma was no special kid, born into the village of Kirigakure, he
seemed like any other kid, he entered the Ninja acedemy by the
encourage of his parents, though he hates violence himself, he didnt
fell like defeying his parents, so he entered, he was going trough it
all at average, he was neither bellow or above the other students,
however he one day observed something that was going to change his life
forever, he witnesed a downright slaughter of some people in the
village, the reason to this was lost to him, he never found out, but
the massacre and blood woke something deep within him, like there was
something that wanted control, and he cant remember much more, but when
he came to himself again, he was standing with a sword flowing with
blood, and his face and clothes also filled with it, and the men he saw
making a slaughter a while ago lying decapitated infront of him, and he
was just starring at the bodies, he couldnt move, he just kept starring
at the bodies, and lost grip of the sword, he didnt want to think it,
but he kept believing he had done this, and his eyes fell to his hands
that was covered in blood, people was begining to gather, as the
massacre was discovered, people just starred at him they didnt seem to
believe he had done it seeing as he is just a kid, however the talk
went trough, and finnaly somepeople decided to take Sakuma away from
all the blood, he stayed in a coma for a week before he finnaly came
too again, believing it was a ll a dream, but the first that meet him
was a resticted area hospital room, with one Anbu standing gaurd in
there, allready then was he sure something had happend, shortly after
he woke a man entered the room, whatever it was the Mizukage himself,
or someone else of high standing was unclear to him as he was still
confused and his sight was blurry, however the man was preacing him for
what he had done at that time, the people was criminals, and that he
had handeled them like a true ninja, however Sakuma didnt understand
any of it, he hadent done any of that, and thats what he told them, and
he didnt change his mind about that at first, but they seemed so sure,
and keept telling him he had done it, so he slowly began believing it
as he stod there with the sword, but when they offered him to go under
special tranning, and become maybe even greater then Zabuza he
declined, he didnt know what had came over him at the time, but he
didnt ever want anything to do with that, however he was constantly
being observed from that day, and given special priviliges by the
higher ups, cause they wanted him to progress as fast as possible to
use for their own ends

Personality: Sakuma is a freindly person
that hate to fight, he acts freindly over for anyone he meets exept the
people that frighten him, but he also got a darker side that acts with
no remorse compation, or feeling at all, but is just a cold killer

Abilities: has undiscovered powers that is still a mystery to himseld

Attacks:
Has no special attacks beyond the standard Jutsu, and to fight with a
sword wich he never bears on him, as he is affraid to use it again