First is her normal mode.. (as a Vampire) 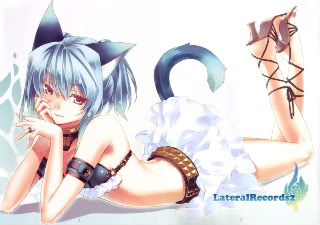 The Second is when she joins a party or other special occasions.. 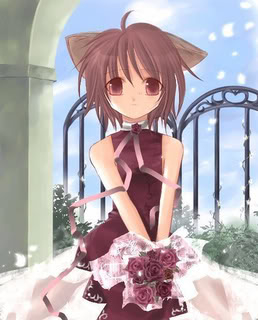 Her hair can colour back if she want to..


Biography: She's bitten by a Vampire on her 19th birth day. With wasn't to long ago she doesn't have any memories about her life before it, just for now she's travelling around because after she waked up she killed everyone around her. The only people she remembered where her family but nobody is alive any more.. (She killed them all)
(She got bitten by Kiyano Toka but she doesn't know it yet..)

Personality: She's very nice and doesn't like the biting thing of her Vampire nature. She's new in it, but enjoys the hunt for fresh blood. Most of the time she kills animals from farm animals to small animals she catches. As a cat person she was already fast but with her powers as a vampire she got very strong and even faster. She's just like a cute kitten, who you can pet. But don't make her angry cuss she will scratch your eyes out! She's very exploring and likes to meet new people. But doesn't always know what to do or say.. She needs someone to follow..
She likes an easy pray that's why she killed her family.

Abilities: As a cat person she was already fast but with her powers as a vampire she got very strong and even faster. Some people even say that she sometimes moves faster than light. But that is just rumour.

Attacks: She haves her claws and her fangs, She bites and al that cat like things. She also haves some knifes and al to defend her self. (But she never uses them)

Relationships with other characters: Kiyano Toka, (He did bite her, but she doesn't know it yet..)