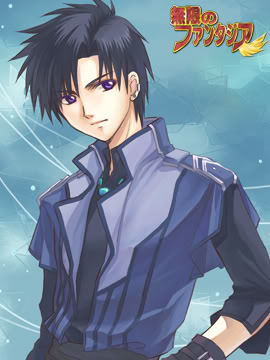 Ryo is a clanmember of Arakuta and was a ANBU captain from Sumizome.
He is a special boy that contains also a lot of chakra like kisame from Kirigakure
One day he was on a mission with 2 of his friends that where also his squad members
to spy on a man who was a missing-nin from Sumizome.

They followed them to his hideout but he had a hidden jutsu activated so that if anyone besides him takes a step on his territory
he would know that and ambushed them with Shoton releases so that they couldn't escaoe.
unfortunately his friends where all killed but Ryo survived and began to fight him.

they where equal and the man tought Ryo was out of chakra so he walked to him
in his victory mood but suddenly a kunai pierced his heart and won but he was self injured.
after he was brought back to sumizome he healed from the fight and stopped with being a ANBU captain
he laid down his function and defected to konoha to have a peacefull live

He gained to Shoton style by killing that missing-nin and has trained it since with it
to become stronger and protect someone when needs to.

Now he is a laidback person who enjoys being outside in sunny weather
but when he needs to help someone he will do that.