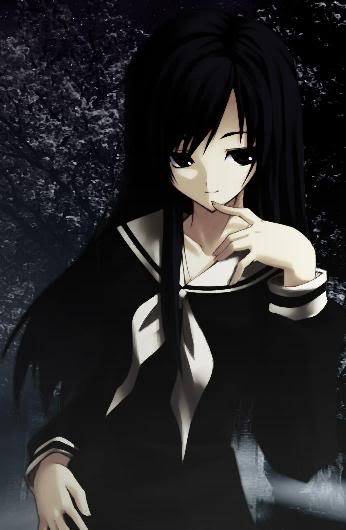 Personality: Saku naturally has a warm and welcoming personality but that was ruined when she was given the Dokuro-Kanpan. Unfortunately she now has a withdrawn, scared personality, timid and never wanting company or even to talk or be near people.

Attacks: Saku is slowly being taught by Yanjin but basically has no knowledge on how to fight.

Items/Weapons: Dokuro-Kanpan [Skull Cracker] - The Dokuro-Kanpan is a legendary sectional whip that has the ability to control air, at first the whip appears to be a usual, every day whip but it has a second stage, a heavy, metal sectional whip, so far this is the only legendary weapon known to possess a second stage, in the first stage the whip can still control air manipulation but in the second stage the power increases and the whip becomes like an extension of the user’s body.

Biography: Saku had a ordinary life, she was always the popular girl at school, the pretty one that all the boys had a crush on, she lived a life where she genuinely had no problems, she was happy, outgoing and beautiful, it’s all a girl could ask for.

She somehow came into position of the Dokuro-Kanpan, this made her go crazy whilst at school and she killed almost everyone she found, soon after she went crazy she was tracked down by a Hunter, Yanjin, Saku’s Dokuro-Kanpan reached it’s second stage but she was eventually knocked out by Yanjin who had now become a Werewolf.

Now she is travelling with Yanjin, training under him and fighting alongside him