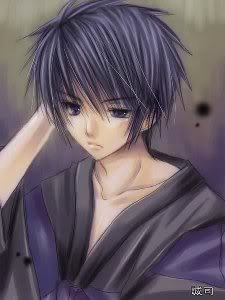 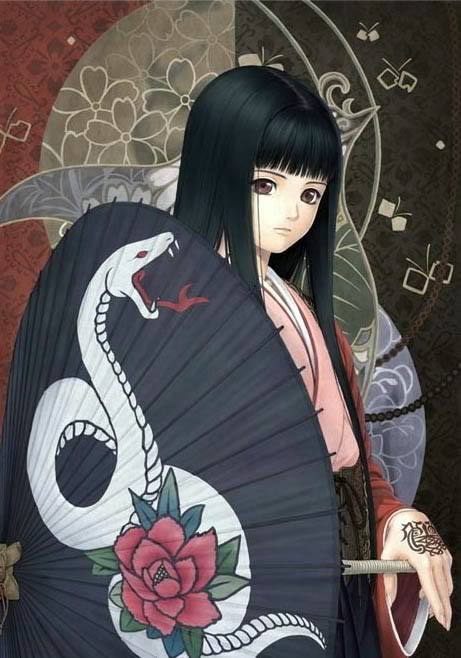 Biography:
Raka as he was called at birth, seemed pretty ordinary, and was born
into a poor village, his parents where descendants of a Ninja clan that
specialized in disguises, Raka is the first of this clan to develop a
shape shifting ability, but this wasn't known to himself before the age
of 7, before that he lived with his parents and helped them out, they
where Rice farmers, it went fine, and they managed to just barely
scrape by, but it couldn't last forever, the feudal lord began waging
war in the land, and taxes rise, the need for supplies raised as well,
making it impossible to live as they did, this happened around the time
Raka turned 7, and he began knowing his ability to change form, and
quickly learned to utilize it, as the need for money raised, Raka
acquired weapons, and leaved to learn the way of the assassin, his
parents where worried because he suddenly disappeared without a word,
but they still had to scrape by, so they had to continue working
without Raka near them, as Raka ventured out, he quickly came upon a
dojo, where he was taught the way of the assassin, he specialized
himself in the way of tools, and as he lived there he began controlling
his shape shifter ability, using it to become female when needing to
seduce male targets to assassinate them, and when male he used brute
strength more to defeat opponents when outnumbered, when he left the
dojo, he became a hired blade, to kill anyone that he was paid for, and
took any job as long as the pay was good.

Personality: His
personality varies from form to form, he has learned to act accordingly
to his appearance, the cold blood to kill people is the same no matter
what, but wont kill people if they aren't his target, or stands in the
way

Abilities: shape shifting: can turn himself into any form,
everything is changed outer appearance as well as internal organs is
transformed into what he becomes, so female and male transforms,
however if the person becomes pregnant for any reason, the ability to
shape shift is disabled, the person cant transform to anything smaller
then half his own size.

D-rank
Buki Houjin
(Weapon Sealing) Weapon
Sealing is a Fuuinjutsu technique that allows the ninja to seal away
nearby weapons. After unrolling a scroll to hold the weapons, the ninja
writes the needed sealing incantation onto the scroll. Then by forming
the needed handseals, a vapor will emanate from the scroll to encompass
the weapons and take it back to the scroll for sealing. (Note:
Supplementary type. Cannot be used against attacks. Only with
stationary weapons.)

Heiso Kajou Houjin
Ordinary Item sealing
is a fuuinjutsu that allows a ninja to seal away nearby noncombat
items. This can range from rocks, to sticks, to even food. And of
course there's a wide range of things that can be stored for future
use. That is what somebody would realize if they ever went to his
house. Anything and everything that he uses is in a scroll. That helps
maintain the look of a clean house. Not only that, but it takes much
less space due to the scrolls holding everything.

Kouhan - Shuriken
(Advanced
Seal Shuriken) Upon completion of the seal needed for this technique,
the user places the seal on a surface. Once the seal is in place, a
single handseal from the user causes the seal to erupt at any time,
sending several shuriken at the specified opponent.

Kouhan - Waikire
(Advanced
Seal Slicing Wire) Upon completion of the seal needed for this
technique, the user places the seal on a surface. Once the seal is in
place, a single handseal from the user causes the seal to erupt at any
time, sending several very thin lengths of wire at the specified
target(s). Once the wires are wrapped around a target, the begin to
tighten and cut into the skin. However, the wires are rather easily
broken. If several of the wire seals are activated from different
places, wrapping around the user from different angles, then the wires
are quite capable of binding the enemy to their spot.

Tsuyome no In
(Strengthening
Seal) This seal can be inscribed onto an object, weapon, or armor,
effectively making the weapon unbreakable by any normal means.

Uwakimono fuuin
(Heat
seal) A variation of an exploding tag. Instead of actually exploding,
it releases its energy over time, producing heat and/or light. Can be
used as a light source, wrapped around a lunchbox to keep the food warm
or even be kept under the user's clothes to protect him from bad
weather.

C-Rank
Batsu Ippuku
(Attack Scroll) A more
advanced variation of an equipment scroll, it is modified in such a way
that when activated, the contents of the scroll will be forcefully
ejected. This allows a faster attack (as the user only needs to open
the scroll towards the enemy and doesn't have to throw the projectiles
himself) and as such it is often used by projectile specialists. It is
also frequently used in traps

Kouhan - Katon
(Advanced
Seal Fire Release) Upon completion of the seal needed for this
technique, the user places the seal on a surface or even a person. Once
the seal is in place, a single handseal from the user causes a large
ball of flame to surround the tag and expand forward, or to just burn
around the tag if placed on a person. The flame is of the same strength
and duration as the standard Goukakyuu no Jutsu. Another use of this
technique allows the user to trigger the fireball to, instead of coming
out as one large ball, to break into many smaller balls of fire and
cover a larger area and aim at more targets (as the Fire Flower
technique).

Items: basic ninja tools, and a sword hidden in an old japanese tradition umbrella like the one on female picture
_________________