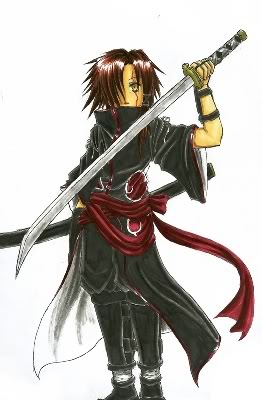 Biography:
Tenshi was born in a small village not known to many, he was said to
become a splendid person when he grew up, so he was named Tenshi
meaning Angel, but as he grew up he didnt show much promise, and was
pretty much just a medicore person like everyone else, so he slowly
attained the nickname Datenshi meaning Fallen or Failed Angel, however
his older brother kept cheering on him telling him he would be able to
do great things if he just got his act a little more together, and it
was this support that made Tenshi put more effort into everything he
did, his nickname stayed, but his skills began exeding those of his
freinds and other students, he began to learn the double sword style of
the shinsengumi, his skills where still a bit rough, but he was able to
prove a match to those he thought even if they where older then
himself, the years went by and he kept improving, his brother left to
join the army when Tenshi was 15, but at his 16 year birthday his
brother returned, but the alarm in the village soon sounded, and the
village militia was drawn out as weird creatures began approaching, it
was like things that had risen from the grave, Tenshis brother got
ready to protect their part of the village, as the militia was killed
off easily, apparently most of the monsters went past their house, but
just as the danger seemed to pass someone approached the door, Tenshi
was hidden away in the basement, he was able to look from the basements
trap door, so he could see what was going on, as the door got opend a
woman without much cloth on entered, after saying out some curses and
threads she killed Tenshis brother so fast it could barely be noticed,
and the rest of the family fell aswell, and he looked at it all
happend, his eyes was soaked from tears, after killing them all the
woman looked over at tenshi who was barely vissible, she had knewn he
was there the whole time apparently, and Tenshi hid as soon as her eyes
went upon him, he then heard her laugh evil, as she left the house
again, it took Tenshi quite a while to gather his thoughts after what
just happend, after a few hours he went up to the house and picked up
his Families sacred swords and went after this evil human in a enraged
state of revenge lust.

Personality: He is normally freindly but
witnesing his entire family slaughtered gave him great scars on his
mind which has made him more aggresive and hatefull to other persons