In the study of mythology and religion, the underworld is a generic
term approximately equivalent to the lay term afterlife, referring to
any place to which newly dead souls go. In most cultures the term
refers to a neutral or dystopic realm of the afterlife, instead of a
heavenly or paradisiac one. Sometimes the underworld is identified as
"Hell" because Hell is thought to be under the Earth.

In many
religious traditions, Hell is a place of suffering and punishment in
the afterlife, often in the underworld. Religions with a linear divine
history often depict Hell as endless (for example, see Hell in
Christian beliefs). Religions with a cyclic history often depict Hell
as an intermediary period between incarnations (for example, see
Chinese Diyu).
Punishment in Hell typically corresponds to sins
committed in life. Sometimes these distinctions are specific, with
damned souls suffering for each wrong committed (see for example
Plato's myth of Er or Dante's The Divine Comedy), and sometimes they
are general, with sinners being relegated to one or more chamber of
Hell or level of suffering. In Islam and Christianity, however, faith
and repentance play a larger role than actions in determining a soul's
afterlife destiny.
In Christianity and Islam, Hell is traditionally
depicted as fiery and painful, inflicting guilt and suffering.[1] Some
other traditions, however, portray Hell as cold and gloomy. Despite the
common depictions of Hell as a fire, Dante's Inferno portrays the
innermost (9th) circle of Hell as a frozen lake of blood and guilt.[2]
Hell is often portrayed as populated with demons, who torment the
damned. Many are ruled by a death god, such as Nergal or the Christian
Satan.
In contrast to Hell, other types of afterlives are abodes of
the dead and paradises. Abodes of the dead are neutral places for all
the dead (for example, see sheol) rather than prisons of punishment for
sinners. A paradise is a happy afterlife for some or all the dead (for
example, see heaven). Modern understandings of Hell often depict it
abstractly, as a state of loss rather than as fiery torture literally
under the ground.

The Gates to Hell (MUST enter this way!) 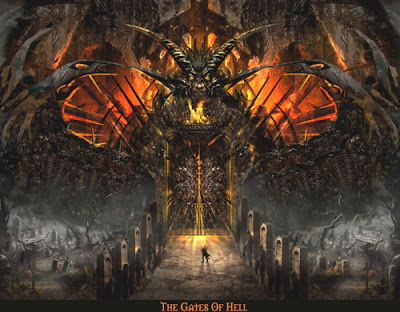 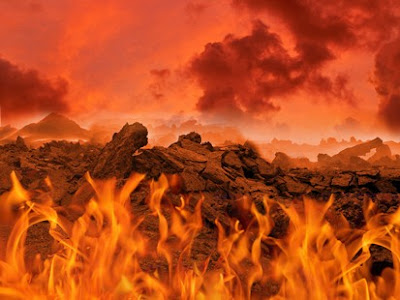