Appearance:
instead of the chain on the picture he got a necklace looking like this: 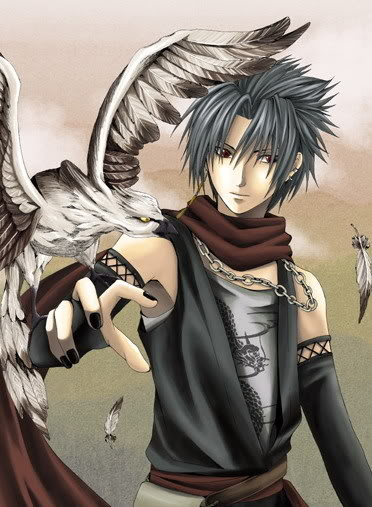 Abilities:
The Nara clan are known for their ability to control their shadows. The members are peaceful, and they have a traditional hobby in tending deer. The Nara clan's background is a mystery; also, they own secret labs where they conduct various kinds of research and experimenting.

Akki Kaze
(Demon wind) A jutsu which compresses air, creating temporary strong winds in front of the shinobi. If the target is a creature, all the jutsu does is prevent the target from moving forwards for a short while. But, as a defensive spell against things like missile weapons, the casting time is short, making this a very useful skill. Also, this jutsu can be used while fleeing from targets who it is important not to injure.

Sarutobi no Jutsu
(Flying Monkey Technique) Through the use of this technique, the user is capable of jumping phenomenal heights. The user first channels chakra under their feet, compresses it, and then causes it to explode upward as they jump, easily sending them 20-30 feet into the air with minimal chakra expenditure. Also, while falling or jumping, the user can also use this technique in order to have the same effect, making it seem as if they are jumping off the very air itself. There is no limit to the additional distance which can be covered; it is only limited by the amount of chakra the user puts into it. However, it shouldnt ever be forgotten that though the height is unlimited, anyone who jumps 200 feet into the air, ninja or not, is definitely going to feel it when they land. On the other hand, a more chakra intensive use of this technique allows the user to use the sudden gust upward from the ground to slow fall to the point of not receiving any damage.

Gufuugiri
(Tornado Slash) The user spins around rapidly, using chakra and a sword, they unleash a small tornado. Its winds are capable of slashing anything in it's path. (Note: Sword required, or some large bladed weapon)

Kaeba Kaze Shibaku
(Blades of Wind Strike) The user swings the weapon in a horizontal strike about midsection in height, then the channelled chakra in the blade releases several razor sharp cutting blades of visible wind toward the target(s). (Note: Needs a sword or some bladed weapon)

Kuuki Bakuhatsu
(Air explosion) Makes a compact ball of air in the user's hand to be thrown and exploded in the desired location. This jutsu deals little damage, and was created to deflect things like arrows, shuriken, kunai and weak offensive jutsu. Since it can be used against all kinds of attacks, it is considered a useful beginners' technique.

Renku Dan
(Compressed Air Ball) The user gathers as much air in his lungs as possible and mixes it with chakra, making it almost into a liquid of sorts. When the chakra is gathered, the user violently expels the chakra compressed ball of air at a target. The ball is capable of badly injuring the primary target. Almost everyone and everything else within 20 feet of the initial impact is blown away by a massive, sudden gust of wind. A much larger area is affected as if by a very strong wind, easily blowing around small or light objects. The gust lasts for about four seconds before subsiding.


-Ninpou Jutsu:
Bunshin no Jutsu
("Clone Skill") A basic ninja jutsu required to graduate into a Genin. Clones of the caster are created in their perfect likeness. They are false images, somewhere near the realm of illusions, but physically present. They can not cast jutsus or throw weapons, as they possess no material form. "Bunshins" will automatically disappear when hit. [E-Rank]

Henge no Jutsu
("Transformation Skill") A basic ninja jutsu required to graduate into a Genin. The user is transformed into a different appearance. They can change into anything from another person to a shuriken, as long as it is not a gas or liquid. In transformation, the user retains the same strength, weight, and density; one can not fly away as a bird or evade an attack as smoke. [E-Rank]

Kawarimi no Jutsu
("Body Substitute Skill") A basic ninja jutsu required to graduate into a Genin. The user switches his or her body with another object in an instant. It can be a plant, object, or animal, but not a person, something gaseous, or a liquid not in a container. Traditionally, the ninja inexplicably switches with a log. It is a useful jutsu for escape or evasion, but must be prepared one post prior to use by concentrating on the object in question and forming the hand seal. [E-Rank]

Ayatsuito no Jutsu
("String Reeling Technique") Ayatsuito no Jutsu is a Ninjutsu technique utilizing wire. This string can be used in rappelling, or as a method to tie down and restrict the movement of an opponent. (Note: Needs wire.) [E-Rank]

Nawanuke no Jutsu
("Rope Escaping Skill") Nawanuke no Jutsu is a very basic Ninjutsu technique that allows a ninja to escape from rope binds. The user focuses their chakra into the ropes, causing a bare minimum of friction between them; this will cause simple knots to come apart. [E-Rank]

Shunshin no Jutsu
("Body Flicker") Shunshin no Jutsu is a basic technique. The ninja will disappear and reappear in an instant, allowing them to travel along short to medium distances almost instantly. This teleportation-like technique is usually just used for dramatic entrances or exits, as upon arrival in the new location, the ninja will need to completely reorient themselves to their surroundings. It also uses far too much chakra to be used for traveling purposes. It may not be used in battle. [E-Rank]

Kabenobori no Jutsu
("Wall Climbing Skill") By focusing chakra into the feet, the user is able to walk on walls. Walls that are thin or frail are more difficult to walk on without breaking them. [E-Rank]

Kinobori no Jutsu
("Tree Climbing Skill") By focusing chakra into the feet, the user is able to walk on trees. More difficult than walking along solid walls. [E-Rank]

Suimen Hokou no Gyou
("Art of Water Walking") By focusing chakra into the feet, the user is able to walk on water. More difficult and chakra-consuming than walking on trees. [E-Rank]

-Subtype:
Kagemane no Jutsu
("Shadow Imitation") AKA Kage Shibari no Jutsu. Kage Mane no Jutsu is a Ninjutsu technique developed by the Nara clan. It's original purpose was as a skill to help delay any pursuers. After forming the needed hand seals, the clan member is able to manipulate their shadow along any surface. By using other nearby shadows they can further extend the reach of their shadow, however they are limited to the surface area of the original cast shadow. Once the clan members shadow reaches the targets shadow, it will attach itself. While attached the target will be frozen, only able to replicate in mirror form the actions of the clan member. If the clan member is low on chakra, the Kage Mane will falter and the shadow will return to its normal form. (Note: Non-canon rank; genin. Required Nara tech)

Koudou Kagemane No Jutsu
(”Advances Shadow Imitation Technique”) After the user has performed a series of handseals they will attach a shadow to their bodies. Once they have made physical contacts with target, the shadow will contact the opponent and restrict them like the kagemane.

Kage Bachi No Jutsu
(“Shadow Punishment technique”) This technique works in a similar manner to the Kage Kubi Shibari. Instead of strangling the victims, the user will freely control one or two shadow hands. These can be used for breaking limbs, disarming or just simply punching and hitting the target. A not-so lethal alternative to choking the opponent. These hands cannot be resisted in the same manner as Kubi shibari.

Kage Kubi Shibari no Jutsu
("Shadow Neck Bind") Kage Kubi Shibari no Jutsu is a Ninjutsu technique developed by the Nara clan. After first binding the target with the Kagemane no Jutsu technique, the clan member uses their shadow to form a hand to creep up their opponent's body, and to their neck to bind it. A stronger opponent can oppress the hand however. (Note: Requires Kagemane no Jutsu)

Kagenui no Jutsu
("Shadow Stiching") Ninpou: Kage Nui is a Ninjutsu technique developed by the Nara clan. To perform the technique the user will first form the needed handseal to extend his shadow. The user will then change the handseal to cause the shadow to emerge from the ground in tendrils. The tendrils can extend and whip about and are strong enough to pierce nearby targets. (Note: Requires Kagemane no Jutsu and Kage Kubi Shibari.)

Kage Asshou no Jutsu
(Shadow Domination Palm Teachnique) Attack jutsu; Shikamaru used this tech in ps2's Naruto: Narutimate Hero 3. First, a clan member must use kagemane to normally to catch the enemy. A light bomb is thrown into the air and detonated, causing the shadow to widen into a gigantic hand. Then the clan member clutches his/her fist, causing the shadow to crush the helpless victim's entire body. (Note: B-rank, chuunin and jounin only. Requires all the other techs.) 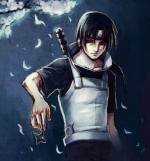 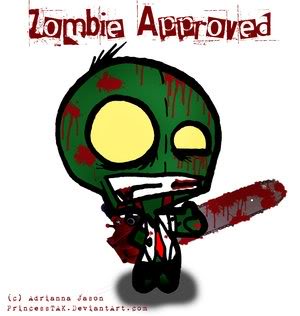