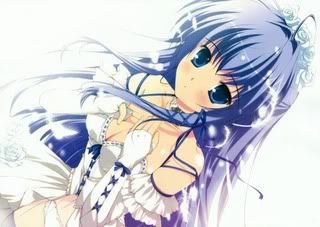 Personality: Shy and child-like, But has a calm and soothing feeling which can calm many souls, She fears the dark and danger of others.

Items/Weapons: She carries a small pouch of money, a pendant shaped like butterfly wings along with a small dagger for protection, two scimitars, and a dark blue cloak.

Biography: Tsukiko is the Eldest daughter of the King of Carnelia Hiro,which is a small Kingdom in the forest of eve's. Her mother was a fairy by the name of Fumiko who had entered the human world by mistake in the country of Carnelia where she had met the young Prince at the time Hiro. Hiro soon became king, quickly taking Fumiko as his wife and lived with her in Carnelia. But soon after the birth of Tsukiko, Fumiko disappeared from the human world leaving Hiro in despair of losing his love and Tsukiko motherless.

Hiro soon married again by force of his council and married a normal but greedy human woman by the name of Takako. Takako hated Tsukiko for being another woman's child and for being in line for a throne her own child would not have when born. Her child was soon born with the name of Yoshiko whom Takako raised to hate Tsukiko as well. During this time Tsukiko became shy and felt insecure around others where her younger sister seemed to be more open and social which created a thought where she was inferior. But a mysterious box mysteriously appeared in her room on her tenth birthday and in the box was the butterfly pendant with a letter that was signed with the name Fumiko Hanawara. Ever since then Tsukiko has been sneaking out to the streets of the city where the castle resides and she tries to help all of the commoners who are in need.

Ability's: She is good at sword point and she has good flexibility. She also loves to dance when she can and she loves being in the forest where she can easily jump between branches.

Relationships with Other Characters: none as of yet.