Nickname:
Assassino -People that recognize Naito call him Assassino or Assassin because of the way he dresses.
It's the same outfit that most of the remaining assassin's wear only Naito has a different color. 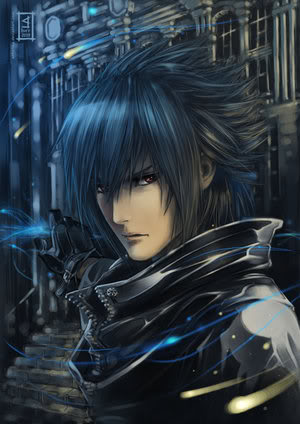 Natsu's eyes are red but there a black line around them.


-When Kyo takes over Natsu's body his eyes are completly red and his hair is light blue. 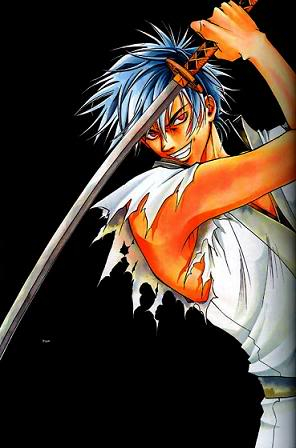 Natsu's very intelligent but he is the essence of the anti-hero.
His personality is very dark, he sticks to the shadows, and he kills without any sense of morality.
But after he met Tsukiko he slowly starts to change.
---
The soul that's trapped inside him, Kyo fears no one and is quite arrogant and self-centered.
Kyo was called the Thousand Slayer for killing over 1000 samurai during the battle of Sekigahara

Natsu carries the legendary nodachi called Tenro (Heavenly Wolf), made by mastersmith Muramasa.
He obtained it when Yatsuha a female assassin threw it to him.
The nodachi actually belongs to Kyo. 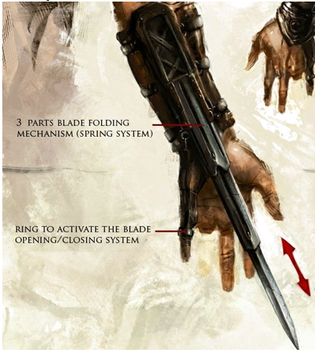 The Hidden Blade is mostly used for stealthy, low-profile assassinations
upon soldiers.
An unaware soldier may be stabbed in the neck or the
stomach without drawing too much attention.
The hidden blade can also be used while in combat.

The Short Blade a weapon that Naito is holding.
It's a short, curved blade that is a smaller, more agile weapon than the longsword.

Five throwing knives around his right arm that he uses to attack enemies from a distance.

Two smoke bombs in his belt next to his pouch.

A scroll with the names of the criminals he's searching for.

When Naito turns 8 he shows a interest in paintings.
He's been growing up in a"normal" life with his parents (Akio, Tsuki) and his friends though people thought he was a demon because of his red eyes.
Naito keeps going to school and continues his "normal" life until he's 16.
While he was sleeping 7 people entered the house asking for a list (but it looks more like a scroll.)

Naito's father Akio knows the danger and lies telling the criminals that he doesn't know what their talking about.

(The list/scrollhas all the information about all the famous criminals including the ones that entered his house.)

While Akio distracted the criminals Naito's mother Tsuki, gave him the list/scroll they were searching for.
His mother tells him the place where he has to travel to and to search for his uncle.
Naito jumps out the window and leaves town for a few years.

During those years he went to his uncle Juto, who was the only one Naito had left.
When Naito turns 17 he just sits on a pillow staring at the window for hours.
Juto decides to take Naito out for a stroll.

On that day Naito cried for the very first time when he finally expressed his feelings.
He misses his parents, he misses his friends, he missed everything of his passed life.
Juto decided to train him to become a assassin.

That they are born in the Shikaku clan.
A clan of assassin's who were hired by the royal army to stealth kill any enemy.
But two groups started to grow in the clan which eventually became it's downfall.

Naito doesn't believe anything that Juto tells him but when they go back to his house he shows him a special room where he has everything he needs to kill someone.
Juto then offers Naito to train so that he can protect his family.

He ran to his room and grabs the scroll that he brought with him three years ago.
Naito starts his search for these criminals that killed his parents.
Naito still doesn't know that his parents are dead but he decides to protect them by killing the criminals one by one.
Over the years his personality has changed.
First he was very cheerful and loved dancing and going out with his friends everyday.
Now he has become a very dark person with thoughts only about revenge.

After meeting Tsukiko Natsu slowly changed.
He became kind and started to worry about others.
But his goal in life hasn't changed after finding out the criminals were actually the goverment.
Natsu's goal is to find the people who murdered his parents and to find a way to get Kyo's soul out his body.
Kyo's goal is to find his real body.

- For several years he has been training in the art of a Assassin.
He can use Tai-Jutsu and strong sword strikes,slashes and trusts with a breakdance and acrobatic touch.

- During his stay in the assassin's hideout they used his body as a tool and mixed it with the soul of someone else.
It's the soul of Kyo, the man who killed more then a thousand men during the great war 100 years ago.
He takes over Natsu's body whenever he uses nodachi.

- Kyo can't use all his power because he isn't in his real body and he can only use Natsu's body for 10 minutes if he uses it longer his soul will dissappear.
He was shown to be fast enough to cut musket balls in mid-air
and kill the gunmen in a second.
Which means he can move past bullet timing.

For now Kyo is only able to use Mizuchi. 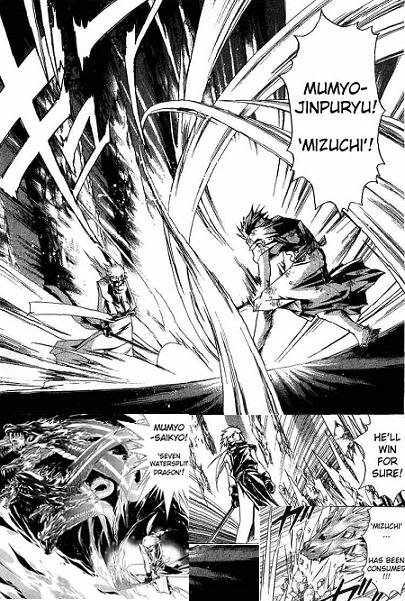 Mizuchi (みずち, 蛟): An attack that uses the air to cut an opponent to pieces; a sub attack of Seiryu.
Though this attack is strong it can be blocked.
If you pay attention you can see the wind travelling over the ground and also breaking it.
It is revealed later that this attack is not the true Mizuchi.

Finishing Quote: You heard it too didn't you?... The voice of the wind.

---There's still a lot to tell about both Kyo and Natsu's past.
But I'll leave that behind and put them during roleplay and add them here ^^

Relationships with Other Characters:

Tsukiko; special friend, best friend and so on.
Yatsuha; the person he hates the most.

Re: Natsu Hizashi and Kyo

APPROVED.
(not a overpowered character, I wrote his whole bio, details with the weapons etc. ^^)