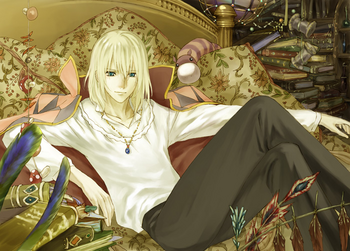 Biography:
He is the youngest of Vladmir Dracula’s children, he loved to be alone and play
as he sensed that he was different from his sister who was walking in the
spotlights. He was always very nice to every one and had a save live in the castle.
But as soon his father died, his sister Aleera started to rule the castle.
Aleera took away a lot of his freedom. Cuss she was always irritated by every thing he did.

She did throw him out side in the bright sunlight, to punish him for something small.
But already soon he was banned from the castle and left with the man his sister saw him with.
Things didn't go well and Donovan again left from a place he called home, starting to travel around the world. Learning about all kinds of magic as he enjoyed his studies about it, and he grew out to be a great wizard.

And now he’s going back to his sisters castle…

Personality: He is as very calm man, he enjoys his life. You don’t make him
angry very fast and is very caring for every one. He probably have been saving
more human lives than taking them. He doesn’t like fighting or people who are angry on him accept his sister.

Items: He has a bag with all kinds of things in it he will need for travelling.

Abilities: With spells he can control people there movements and minds, kill them or let them live for a little
longer and can heal the most dangerous wounds.

Relationships with other characters: His elder sister Aleera