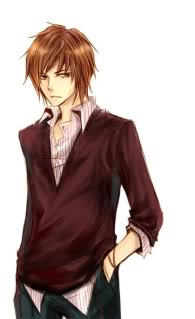 Personality: He's very outgoing, a social who likes talking to people he doesn't know and he loves soccer. Takumi sometimes messes around during class but he's very serious about becoming a cook. He's kind, reliable but likes to gamble, especially playing Blackjack. Takumi listens to various types of music from ochestra to electro house. The only thing Takumi dislikes are people he can't trust.

Takumi was born in May 1993.
He has been a soccer player ever since he was 11 and is an member of the school's soccer team. His part time job is working at his mother's restaurant.

His father is the Keishi (The Chief of the Police Station) and his mother owns an restaurant. Takumi studies to become a cook like his mother but his father wants him to become a police officer. The school he's studying at is called Fujimi Highschool that's now suffering from mass panic.

Abilities: athletics, soccer, cooking and he can drive a scooter.

Items: Carries a back pack, an LG KS360 and his Ipod and also his wallet with his keys attached to it.