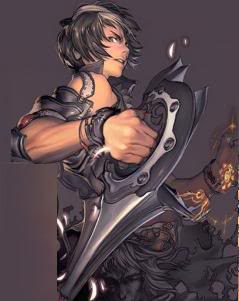 Juto's hair is the same as other people from Highwind Planet some parts of his hair are silver instead of completely black. 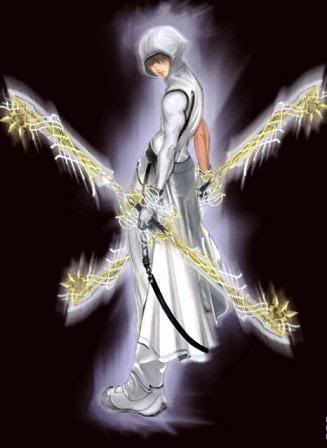 Lost memories Personality: Juto's kind and reliable but sometimes childish. He always helps the namekians with the daily work they had to do to keep the land clean. His hobby is reading books and training with his wooden sword. Juto enjoys living with the namekians, he enjoys this peaceful life feeling like he never had it before.

Awakening Personality: When Juto restores his old personality he's cold yet fearsome. To past the day he still reads books but he's more serious then childish. But because of the kindness the Namekians have showed him he decided to fight for them against the Saiyan race. Juto takes training very seriously wanting to become one of the strongest warriors ever known like he was ordered to become when he was a kid.
And so he has taken an interest..in the dragonballs. During even the worst situations he's very calm.

Training: Received the training every soldier would get but he stood above most of the soldiers showing intelligence and strength during his battles.
Because his leadership let them win many battles he also received training to become a Sergeant.

History: Juto is an amnesiac. With no knowledge of his past, he settled down into a normal life on Namek, until his life was turned upside-down by the war. he can't bring himself to use any other weapon than a wooden sword.

When Juto was born on the planet Highwind and he was raised as a weapon for the government. His only purpose was to destroy and take over other planets like the Saiyans. But Juto's progress in training and battle was outstanding, he was cold against everyone and showed no emotions, The perfect fighting machine.

At the age of 7 he already surpassed most people in his age group and when he was 14 he killed beings from other planets during an exuction. But it was also a test to see if the student is already able to kill someone. When the boy turned 15 he joined the rank army as a low ranked warrior.

During his time as a low ranked warrior Juto was ruthless yet cold and always was able to keep calm during critical situations where his team was losing. The team he joined up with back then always survived because of his wiseful thinking but also because of his strength.

So during the five years Juto became an high ranked warrior who was capable of staying cool during his battles, he knew how to bluff when he was losing and doing so escaped dead a lot of times. a week before the war he was given the rank of a Sergeant. When he turned Sergeant the General gave him an ring like he would give anySergeant. This ring was the result of the cold blooded warrior he became.
One week later the Government decided to change into a peaceful planet like earth. This only angered the soldiers that were fighting for the planet for so long.
And so the General decided to fight against the goverment creating a war.

Juto as the sergeant of his team fought against the government with everything he had but he soon came to the conclusion that the fighting would only destroy the order and Highwind planet itself. So Juto went to the general telling him about his thoughts. The young warrior was then marked as an Traitor after he left the base.

After countless fights with his own men and his own team Juto decided to escape the planet and so he sneaked into the base trying to make sure no one caught him. But he was noticed by a soldier and the alarm went off.
Juto quickly ran into a building where the spaceships where and stole a space ship.
While the soldiers were running into the building Juto pressed several buttons in panic not knowing where he would go and the ship blasted into space. Two days later he hit a mountain on Namek and lost consciousness and parts of his memories...
He's now living with the namekians fighting for them against the Saiyans.
Not remembering anything about his past...yet...

Memory Loss - At the moment Juto uses 20% of his power and he can't use his attacks except simple little energy blasts.

Awakening - Will only happen once when he's "backed against the wall".
The power that's forgotten is restored. But not only his power also his old personality. His expression changes colder, the dark purple aura surrounds his body turning him back into an cold but calm yet fearsome warrior.
(Once his old personality is restored he stays that way)

Blue Highwind - When Juto's arm is covered in blue aura an small lightning figured tattoo appears under his left eye and when he punches his fist into the ground he releases the blue aura on himself. Light blue tattoos suddenly show up on his arms and his hair changes silver, this transformation makes him faster, stronger but also more murderous an rare transformation among the Highwinds.

Highwind Blades - Highwind swords that can appear with a snap.
The swords are combined with energy, a traditional weapon that the Highwinds Sergeant's use.

Blazing Cannon - His signature attack is an powerful energy wave shot from one hand, with the other arm supporting the one that is firing the attack.

Burning Fists - When using hand to hand combat Juto concentrates Ki around his hands to make the impact of his punches stronger.

Raining Slashes: When the Highwind Blades are full with energy Juto slashes one after another several times shooting ten sharp waves of energy in the shape of an crescent moon at the enemy.

Blue Highwind; Sillent Raining Slashes - Juto throws one of the Highwind Blades to his opponent and misses his target on purpose. The blade will then travel above the opponent. Then after flying above the opponent for five seconds six sharp waves of energy in the shape of crescent moons shoots out of the blade down to the enemy.