It Still has some work to be done but it's Now a Playable Character... 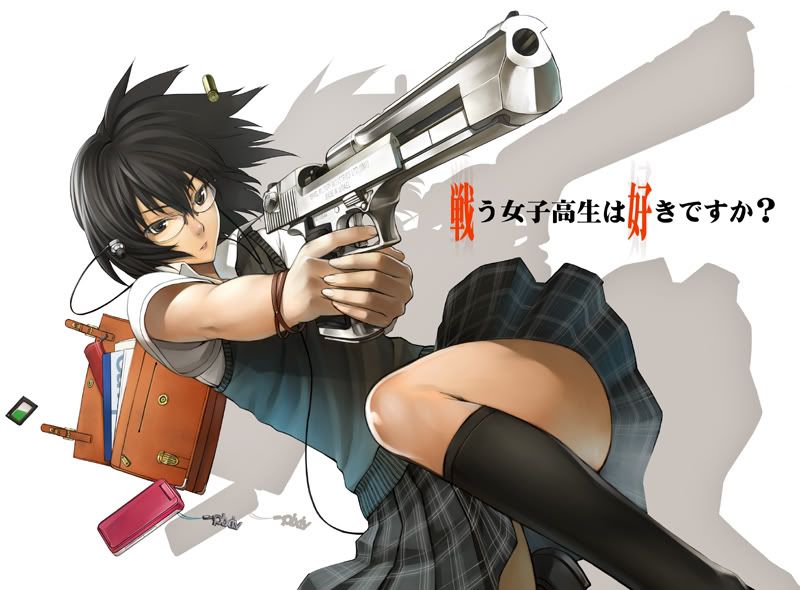 Abilities: Weapons Expert Trainee, Able to Give the Best Torture Methods possible (hanging you in the Air by a Rope by your Feet is one of them)

her Little Black book, where she's Added all kind of Little "Bad" things about students and Teachers to get what she wants...

Listen To me!: if she Wants people to Shut up and Listen she'd Shoot The Gun in the Air and Stand Casually or Look really evil if she Want People to Listen.

DON"T TALK ABOUT THAT!: There are a Few things that Are Deadly to Talk about including her her Short height, and her boobs (she has Little or no boobs to show) She'd Probably Hunt you..

Demonic SureKill: if You talk about her Weight She Goes beserk and Shoots Her Gun (it's Odd because it Brings out a Big Blast but even if you're Hit you wont die, It'll Probably Hurt...and Blast a Hole through the Wall...and the Blast wave is Pink and about a Circle The Size of a Floor...

History/Biography:
She was Born in a Normal Family with a Loving Father and a Working mother, they both Loved Misaki very much but at the Age of 5 she started to Notice a Little Strange thing about her Mother, she Could be Gone for day's and Come back with wounds on her but as it was a normal happening she thought it was normal.

At the Age of 7 she Fell Down a Tree and Broke her Arm and had Some Lacerations and Blooded Knee's, First Crying about, after they went to the Doctor with her mother She said to her "Now i'm Just Like Mommy!" which made her Mother Pretty angry telling her That she would Promise Never to become like her mother, After that it was never spoken about again Untill she was 11...

When She Went into the Room She wasn't allowed to go in at any occasion until her Mother said Otherwise... what she Saw was Something she Never Expected, Weapons, Guns, Every bit of Firepower an Army could Wish...she Only Missed Tanks... The Problem was when she Went in there it was Too give her Mother some Tea... While her Mother said she was Working on a "Project" this Project was a Man Sitting in a Chair Covered in Blood his Face hanging down... she was So Shocked about this that she Couldn't understand why her Normally nice Mother would Just do this in Cold Blood, The Cup fell down and she Wanted to Run away when she Heared the man, "You see now...little Girl...Your Mother is a Murderer" but her mother wasn't a Murderer, she was a Bounty hunter...

Misaki Ran away not wanting Too hear her Mothers Calls For coming Home or to Come back... she Walked around for 3 Day's on the Streets before she Walked past her House again in the Evening, when She Heared Shots Coming From her House she Rushed in, Still worried about her Father.. what she saw there was a Scene she Couldn't Understand... a Man Standing there With a Gun in his Hand, her Father...Shot in the head and Dead, and Her mother At the Door, also she saw 3 Other men she didn't know murdered laying near her Mother, but when her Mother Saw her, She started Crying, she Overcome her Fears and quickly went to her Mother, who was shot in the Back, her Mother Was Crying but with a Smile she Couldn't Understand, but the Words that Came out of her mothers Mouth made her Cry, "Thank god..You're ok my little Angel" because she Thought that her Mother didn't love her... then her Mother also died...

Grabbing the Gun that Was Lying near her Mother she Pointed it To the Man that was standing, she Was crying as she Yelled him for being a Murderer...But the Man Just Turned and looked at her Dropping his gun, her Eye's Widened as she Saw the Man himself had Tears on his Face, "T-that was my sister....i would Never kill her..." he said Slowly and Softly... she just Dropped the Gun looking at him and After Some seconds She started Crying out Loud herself... after some Minutes he walked towards her, and stopped near her and her mother, he simply said with Anger that she Could hear in his Voice, "you want to Avenge her? then come with me..." he Walked out into the Moonlight Showing that he Himself had Trouble walking, she Followed him...and Started training herself to be a Bounty hunter, but she Took one Thing with her, The Gun that She had In her Hand as her Mother died, Later when Cleaning it She Saw where she Got her name, it had Two Angelwings and the Name Misaki on the gunBarrelholder, she Cried again, and Her Uncle Smiled while Seeing this Happen, he Said to her "if you really want to Avenge her...Stop Crying" he walked away while She whiped her Tears...

about 5 years Later she now Goes to School and after Training a Long time she Know Knows Everything there is To know about Guns and being a bounty hunter, even tho she has A long time to go till she Is a Complete bounty hunter... Now Going to Stone Gate Academy she Plays as Soccer player and goes to class... She still hunts For the person who Was behind this murder...the Man her Mother hunted... The Man Only known as... "Falcon" she was trained in the art of many weapons but still only favours her Desert eagle...saying that That will be the gun she will take revenge with..

Ely- You'd Check this out and Check on all Details plz?

wassup with all the weapons?

ahh crp made a Mestake, i was thinking with 3 things at the same time, so

If you put some spaces between the history it would be easier to read.
I kinda got lost a few times

Guess you gotta wait a while though..eh not that I am not gonna accept it or anything xD
but cuz I need to finish Stone Gate Academy and then I can put in the character template

btw with the guns or powers..eh do whatever you want just not to overpowered
Im planning to make a really weird character anyway

xD it's Not gonna be overpwrd