Appearance a discription or a picture or both will be fine. 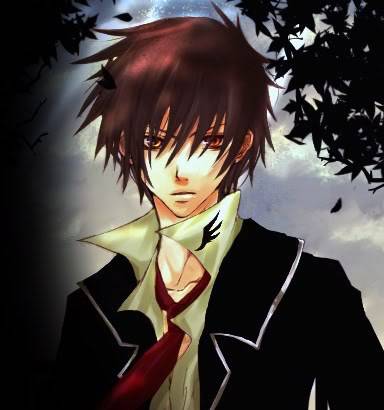 Jio has unusual dark red eyes and something that looks like a tattoo in the shape of a lightning strike on the palm of his left hand. He always wears a grey glove on his left hand to hide the "tattoo".

Personality: Jio is intelligent and has his eyes set on money, Dragontail pistols, power, wealth and the world. He is the kind of guy who would betray anyone easily for absolutely anything that involves money. He seems to act as a noble which he actually was in the past. Jio easily "disposes" of whatever he thinks is annoying, unnecessary or not important but even though he's a jerk to everyone he meets the "young" student is sometimes kind and caring...when he's drunk. Jio likes to listen to ochestra and also collecting Dragontail pistols there are only 10 of them and he already owns 5. The other four owners were all shot by him. During fights he always taunts his opponents.

Jio is blessed with eternal youth and often remarks on periods of time he has lived in.
Around 260 years ago Jio was born in a rich and noble family and was the youngest son of Edward Reaver. Jio had two older brothers but they didn't really care about each other they only wanted to become more famous and never really cared about Jio.

Anyway Jio's father Edward was a very well known mayor back then. He was a mysterious character who didn't really involve himself with the problems of the city which is very weird for a mayor.

When Jio was 17 his mother disappeared there were rumors that his wife was crazy and that he murdered her when she was about to leave him. Her body was never found but Jio's father was declared a murderer and because of that the mayor was sentenced to death. Before he died he cursed the villagers swearing that he would make them pay. Jio and his brothers were kicked out of the town left to die.

A week later after everything that happend the brothers went to the graveyard outside the town to visit their father's grave. But when they were on the graveyard Jio found a cave hidden deep underground. The brothers didn't go inside because they three had a very strange feeling about it, a feeling of fear.

Another week after that the brothers were starving and were in the need of money.
The hunger made them crazy enough to believe anything anyone would say as long as they would get food and so they overheard a conversation about the cave in the cemetary that there was a treasure deep hidden within. Turns out when the brothers look for the treasure inside the cave it is actually a destroyed village. a village that was once the town in the past but the earth grew on top of it over the years.

The brothers found a clan of the undead hidden deep within the cave.
They have been planning to kill everyone in the town but can't get outside unless someone opens the door.

When the undead wanted to kill the three brothers Rio yelled out if there was anything that could save him as in himself and not his brothers. The leaders of the undead appeared, people who were called the Shadows. The Shadows and Jio discussed about his reward something that would also benefit him and them.

So after a long discussion they decided that Jio would open the door and help them kill everyone in the town including his brothers. His reward was eternal youth but he has to bring someone every month, a sacrfice and he or she will have their youth taken away and will eventually be killed.
If Jio doesn't bring someone to the cave his own youth will be taken away and also his life.

And so his brothers were killed along with everyone in the village and Jio kept his promise.
After that happend Jio grew up with money and power and has been living in a mansion for a long time.

After a 100 years of sacrificing people to the Shadows Jio's appearance started to change.
His eyes turned dark red like the eyes of a demon and a symbol appeared on the palm of his hand it meant that if he dies he turns into one of the Shadows.

Jio has seen so much but he will mention what during roleplay.
Now...around 243 years after that incident Jio still lives as he did 143 years ago but now he goes to school. He's still searching for the owners of Dragontail pistols and of course sacrifices.

Items: a back pack with books and a bottle water, his wallet and a Dragontail pistol.