He seems to talk to himself most of the time and stare blankly into space.
But thats only because he knows something no one else knows. Because in
reality, the universe is secretly out to get him! Or at least so he thinks. He
believes that everyone can be a threath who just wants to get rid of him, and so
he stays away from others and usually sit in a corner far from everyone else.
He is socially akward and doesn’t speak much if he’s in a group.

Biography: Gene was born in a normal poor
family. His father had two jobs to be able to support the small family,
and everyday, his mom would sell her body to strangers for money, to
bring food on the table. Once his father learned of this, he hit, and
he's been hitting her everyday ever since. Gene was too young to
understand back then, but the truth is, his father hated him. They only
had to go through this suffering because of him. If he hadn't been born,
they would have a normal life. One day, his father came to him while he
was sleeping. He held a kitchen knife in his right hand, prepared to
kill Gene. But something happened. Just as the knife came downwards,
Gene woke up. His eyes glowing red. The knife stopped in midair, but his
fathers arm continues to move down. He lands a hit on Gene, but at that
same moment, the knife flew down through the neck of the man, ripping
it apart, spilling blood all over the young Gene. He had no idea what
had happened, and when his mother come into the room to see what was
going on, the knife flew towards her. It ran through her left eye,
turned inside her head, and want down through her body, cutting an X on
her stomach before flying out along with her guts and a pool of blood. The knife lands safely in Genes hand. He looks at it and then at his mother, then his father. They were both killed.. by him! He had to leave. If the police found him with the murder weapon it would be bad. He took the knife and fled the house. He lived in the subway with a weird man who told him about the satellites and how they were spying on everyone who was different. And Gene was definitely different. He had powers.. Powers he couldn't control. Even now, people in the subway were mysteriously killed by an invisible man wielding a knife, but it was actually Gene. The only one who knew this was the man with him. He gave him an eye-patch that had some strange markings on the inside. He put it over his right eye and since then people hadn't been killed. He lived in the subway, begging for food and money until the age of seventeen. The man had finally given in to his skeletal body and illness and died. Gene could no longer stay there. if that man wasn't there then no one could stop "them" from getting to him. He needed to blend in somewhere somehow. Thats when he heard of a school. He had no idea what it was or anything, and then just decided to join. Apparently it was a school for the "gifted" and Gene was accepted after showing off his "gift". Maybe these people could help him, or maybe they were actually sent by "them" to secretly get him!?! He has to find out..

Abilities:
Psychokinesis:
Gene has
the power of Telekinesis. He can lift objects as long as they are less then fifty
meters away from him, and he is unable to lift objects bigger than him. The
telekinesis doesn’t serve much as an offensive power, other than it lets him
wield a sword or a gun without actually wielding it. Since he’s
not good at controlling his power yet he is only able to lift one thing at a
time, and even that takes a lot of concentration. With the power of Telepathy he is able to read a
persons mind, though this is not possible unless he can touch the target.
Though he cannot control the power well enough, and thus he does not choose for
himself what in the targets mind he reads. It could be that he sees flashes of
the past, or learns the name, motivation and abilities of a person. He can use it to read a persons thoughts as well, however, he believes that privacy is important, so he only does if it's absolutely necessary. Telepathy
can also be used to sense the presence of other people. Gene can sense people
around him in a 50-meter radius from him. Other than just feeling people’s presence,
he can also feel their aura.

Items:
The knife, used to kill his parents, and several other people.
Seal patch:
His seal is
the eye patch he wears over his right eye. It suppresses some of his mental
energy, to prevent his powers from running wild. If his seal is removed, the
amount of mental energy that would flow through his brain would either make him
strong, or make him go temporarily insane, if it doesn't completely destroy him. Once the seal is released, he won’t
be able to control his powers, so he will be a threat to both ally and enemy. 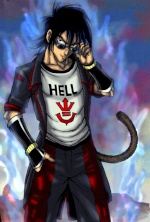