Race: Half Human and half Dragovian

Personality: Despite what happened to the him he is kind to others and feels the need to help others in need but he is can be goofy and arrogant. He doesn't take everything to seriously but when he is serious he gets the job done. What makes Eltrio himself is his confidence but that confidence can work against him. When he goes all out and he overpowers his opponent he tends to mock them. It is one of his traits that is frowned upon but other then that he is a very down to earth guy and there is more then meets the eye because he doesn't lack intelligence. 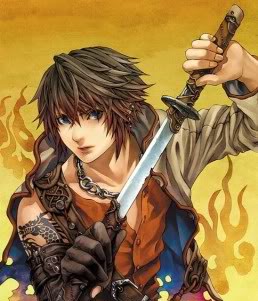 Abilities: Due to his past Eltrio is able to combine two styles of fighting that he is very fond off. Which are magic and his swordsmanship. He has been trained in the art of Dragovian magic which allows him to perform different kinds of magic based attacks. His abilities far exceed those of Dragovians who were not raised by the council members of the Sanctuary. As he combines the two techniques he strikes with fierce combos and powerful that makes him a difficult opponent.

Items/Equipment: Eltrio always carries his sword with him and his travelling bag on his back. What is curious is that the sheath of the blade has markings carved on top of it in Dragovian language. The words are translated into 'Basic, Destruction, Conjuration, Magic' The basic rules to Dragovian magic. Other then that he also carries a Pig-Rat called Munchie that he keeps as his pet.

History/Biography: Eltrio has no recollection of his past. He only remembers the time he spend with the Trodain family. He is not one of them but he has been raised by them. There he was taught how to use a sword and eventually due to his hard work he became the captain of the guard. As the captain of the guard he was send by the king of Trodain to defeat a mage that had the appearance of a fool. The jester stole the sceptre of the royal family Trodain and Eltrio as the captain of the guard has been sent out to retrieve it. During his travel he tries to survive however he can and with the little money he has. He doesn't know that he is the prince of Argonia or that he is the king of Argonia by birth right or that a monster is lurking inside of him. So he tries to find the answers by searching for one jester, Dhoulmagus. One of the most frequent asked questions is the one where people ask him how he knows magic because he can't answer that question due to his memory loss.