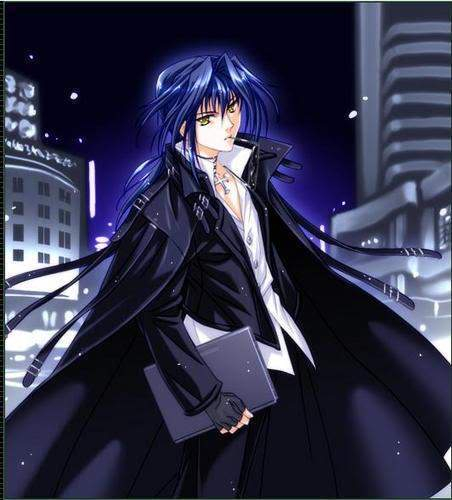 Biography:
Everything is Unknown About him till about 19 Years ago, where he
Showed up in a Village and Took the Life of a Girl, This girl was
Ming-Ju, He hated himself for this and Vowed Never too Kill again, only
thing he Didn't know back Then is that she became a Vampire herself, he
has a Large Castle Few Miles off, And Loves beeing here, he has Several
House maids...only lately he has Began too move again, Searching for
hearing a Rumor, the Girl he killed...is back..

Personality: on
the Outside, Alway's trying too Show Himself as a Kindhearted
aspecially towards the Ladies, He knows how too Impone a Girl too do
everything he wants, but he Only does this Too Feed, He would never
Kill one for real, altho he Detests Humans and everything about them,
he hates Killing more, so he mostly turns them...or keeps them
alive..he will normaly keeps himself Emotionless towards everyone...

Abilities:
Strength, Speed, Power, Agility, he has it all, but Rarely uses it,
Thinking it's Unelegant, he Has a Really powerfull aura about himself,
and when he's Pissed, Everyone around will Notice that...Directly..it
is a Rumor that he might even be able too walk in Daylight..

Aura (his Aura is Large, and when he's Out and Mad, You could Sens that For Miles away)
Mood
Aura (as Simple as it said, his aura is Mood Confined, when he's Mad
His Aura is A LOT more Devilish then when he's Having fun, and this is
Noticable)
Claws (not really Claws but his Fingernails are Sharp and Strong enough too Cut Flesh)
Demonic
Pressence (when he Wants himself too be known he Can sens out a Pulse
Making people Dizzy and Feel Like There Phasing Through Several
Dimensions at ones, it's Almost impossible too Notice it Comming as it
is not needed too give any sign by him that you can see..mostly people
Fall too there Knee's)
Fangs (his Vampire Fangs can Grow or Shrink, he could make someone a Vampire or suck his/her blood out)
rest is Unknown at this time...

Relationships with other characters: Ming-Ju (he was the Person who made her a Vampire)