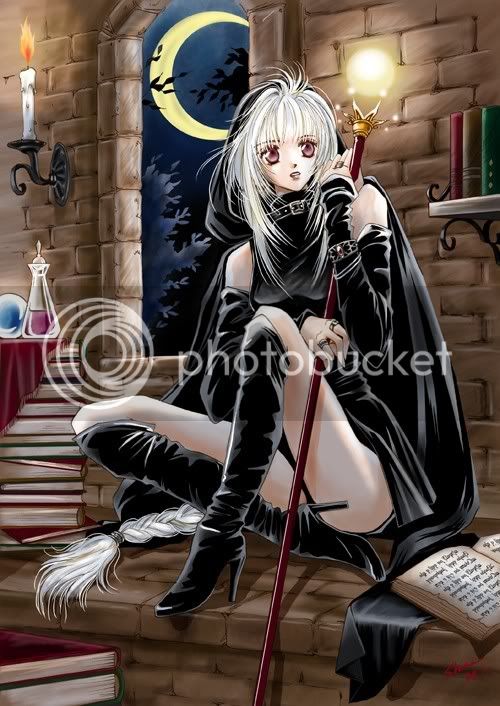 Personality:
laid back and a very loving, can be very cute when she wants to be, and isn't afraid to use her looks to get what she wants. and loves to flirt. She can act very innocent as well as very forward. Adapts to situations pretty quickly though sometimes acts in completly the wrong way for it.

Abilities:
Tsukiko is part Human part demon
teleportation
She is capable of manipulating nature (plants, earth, weather)
She also commands, sprites, nymphs and other creatures of varying sizes
Also able to heal using the alchemy stone around her neck
She is also an alchemist

Background:
Tsukiko was born to a demon mother, her father was a human that had been enslaved to the demon. her father managed to take her only months after she was born and ran, bringing her up learning the ways of the light instead of the evil her mother had planned for her.
At the age of 13 her mother caught up with her and her father, Her father hide her and refused to tell her mother where Tsukiko was she severly beat him and took her father back to her lair, to try and get him to talk.
Her mother returned shortly after covered in blood, Tsukiko took off running horrified and distraught from realising her father was dead. Her mothers chases her down and gives her the choice between turning to her demonic side or death.
Tsukiko refuses to go against her fathers wishes, resulting in her mother beating her severly. Tsukiko summonded all her strength, using all of her abilities eventually killing her mother by using some of her demonic power. She was eventually chased from her village after the villagers began to fear her demonic side. She decided to be a traveller ever since, shortly after leaving she came across an injured Nymph who she nursed back to health, who now travels with Tsukiko.

Items:
She wears a very long silver chain that hangs down her back with a pure white Jadeite alchemists symbol.
she also carries a bag containing silver knives, and a number of different colour jem stones the size and shape of an egg

Relationships with other characters: Click on Image for link to profile

Yui - friend and companion, bound together through ritual

Tenshi - friend and student, bound together through ritual