Height: 1.12 shoulder high (3 meter and can only lay down like into the picture)

Age: Unknown (in real, he is so old like the hell)

Appearance:
Demon Dog and form which he need to move around: 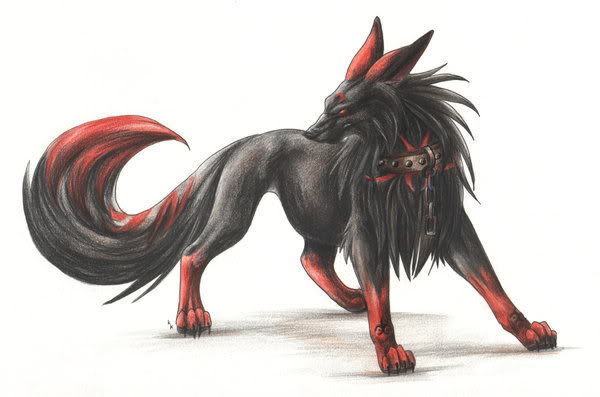 His real form which cant move: 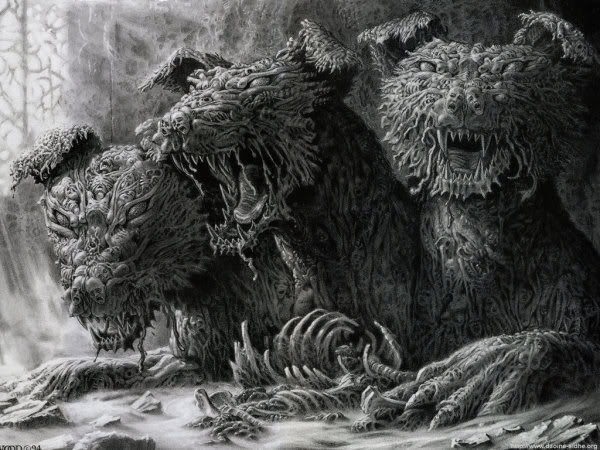 Biography:
Since the creation of the hell, Cerberus is the guardian dog of the hell and protect the living people to get down into the hell.
But he also watch that the death doesnt goes back to the world of the living people.
His master Hades create him that he cant move into his real form and must stay on guard.
But Hades give him also the chance to move around but for this he must change his appearance into a demon dog.
In this form he doesnt have the power he has as hell´s guardian to absorb the souls from the living and the dead people.
Some demon´s which try to escape the hell, try to sneak away but get stopped from Cerberus and he absorb they soul´s.
The other demon´s see only one chance to get away from hell if they try to kill Cerberus.
As Cerberus walk into his demon form around, they attack him and thought he would be dead.
They throw him down a cliff where he get injured and loose his memory.

Personality:
Cerberus doesnt trust someone without his master Hades.
He can be pigheaded and stubborn if he doesnt want something.
With the right handling, he can be really powerful and a good friend which doesnt disappoint someone.

Abilities:
Transform into the legendary Three headed Hell Dog
From the ground break dead hand´s up and grab his paw´s to pull him down.
As soon he lay down, Soul´s raise from the ground and his body absorb them as long he is covered with them and has his original three headed form.

Attacks:
Climbing
He can use his claw´s similar like a cat and climb up at tree´s and wall´s.
After 20 meter´s he need to take a break because his body is not made for longer climbs.

Fire Breath
He can breath fire against his opponent out of his mouth.

Sensible Sense
His ear´s, nose and eyes are sensible.
He can hear smell and see lost soul´s to capture them.
Into his real form, he can absorb them.

Speed
He can double his speed for maybe 20 seconds.
After this he can only walk and run like a normal dog.

Sonic Howl
He howl and paralyze his opponent for a maximum of 1 minute.
The time of the paralyze depend which opponent get into this attack.

Soul Absorbing (Only in his real form possible)
He can pull slow the soul out of a living or dead body if someone is in a radius of 20 meter around him.
The opponent get a heavy breath and feel more weak as long he is into the radius of Cerberus.
He make his opponent that much weak that he/her is not possible to move and get unconscious.
If nobody stop him, he absorb the whole soul and add it to his body which make him stronger.

Relationships with other characters:

Hikari Miasota: She found him into the hell, badly injured and heal him. Now he follow her and is her pet.
Iori Yagami: He is Hikari´s right hand. Balan doesnt really like him and Iori want to fight Balan.