Gender: Female (But can also change into human female and male form) 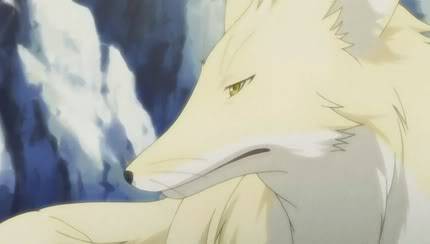 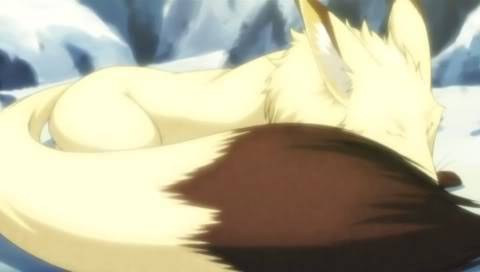 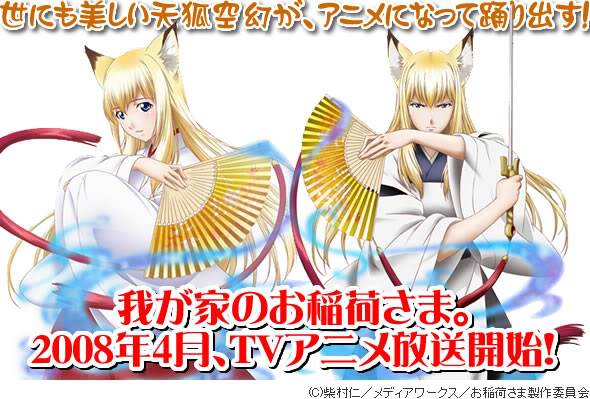 Kuugen is a fox deity that used to be the Guardian of the Mizuchi family.
Kuugen was sealed away by a Water Priest because of her mischievous behavior.
She was released by Noboru after Toru was targeted by a demon and now serves as their guardian.
She can become male or female at any time, but uses the pronoun ore to refer to herself which is usually only used by males in Japan, though in the past females did use the pronoun as well.
She attracts a fair bit of attention because of her blond hair, blue eyes and fox ears, which have to be covered by a hat when out in public, though she can also hide them completely without a hat (they involuntarily pop out if she gets distracted or excited, though).

Kuugen is a gentle and kind Yokai for her race.
She is not really aggressive, only if someone try to piss her off or treat the person which is under her guard.
Her weak point is sweet stuff like cake and chocolate, but all other food with fish are also welcome.
She can eat a lot and doesnt need to watch on her weight which she like to show into her female human form.

Fire
Her element is fire, so she can regenerate fire without any source.
She can shoot fire balls or send a beam of fire from her right palm.
If she is excitement, she breath blue flames out of her mouth.

Water (need a Lake or River as source to use)
As long this element is into her sight, she can control this element like her own.
She collect it into a great water ball and shout out of the ball a strong bean which can pin the opponent against a tree or wall as long the water ball has enough water.

Earth (need a Sand as source to use)
She let the earth shake into a radius of 30 meters and the ground cracked.
Then she raise a pile of sand from the crack and let it as wave down on her opponent.

Wind (need a fan to use)
With small moves of her fan, Kuugen can things surround with her wind the wind and they fly into the direction her eyes aim.
It has a radius from around 40 meters where she can aim perfect and the opponent has less time to react.

Lightning (need a a thunder storm as source to use)
First she must hold a flame into her hand, which moved around her hand as soon she make a fist.
Then she raise her fist up into the ski and try to collect the lighting into the cloud of the thunder storm.
As soon she has enough together, she lift her index finger and point on her target which get short after this get hit from the collected lightning.

Wood (need a root as source to use)
Kuugen need plant or tree´s in a radius of 30 meters around her.
Grass count for this as well.
She let from her earth element the ground split and from the crack, root grown really quick and wind around her target.
Smaller root´s can be used as whip.

Metal (need a Wood as source to use)
She can change her fan or a small branch into a sword for a fight.
The only problem is that the sword as the same ability against fire like the wood before.
So fire would destroy this sword very easy.
But against the other elements, it is strong like a normal sword.
It can be used for normal sword fight and to reflect other spell´s which the blade and throw it with a move back to the attacker.
Swords are the only thing she can make from wood.

Fox Mist (No hand sign´s necessary)
Kuugen let from her body a black cloud appear which let the target think it would stay in the endless of a dark room.
She can move into the area without to get notice.
If she is close enough to the target, sometimes a shadow from her can be visible but it can also be a trick from her.

Hypnoses (No hand sign´s necessary)
Kuugen´s voice changed and get a echo into the words.
Then she can order the hypnotic target with her own voice or break the hypnoses of other people.

Hypnoses Spell - Mind Manipulation
Kuugen moved her index finger in a circle in front of the target.
She suggest the target what she want, as example that the target doesnt see her Yokai form or her fox ears.
The target mumble the text again and get a empty look into the eyes.
She can also use it to get something to eat.

Binding Spell
"Zenten No.4. Zenten No.2. Kouten No.3."
For each number, she need a single hand sign and concentrate her energy.
The opponent get pulled down to the ground and cant move for 30 seconds to a max. of a minute.

Water Ball
"Zenchi No.3. Zenten No.6. Zenchi No.1. Kouchi No.3."
Kuugen need to point on the water, make the hand sign and concentrate.
The size of the ball depend on which energy level she is right now.
A volleyball size water ball raise from the source and get throw it against the target.
She doesnt need to use this spell if she has full energy.

Earth Control
"Kouchi No.2. Zenchi No.5. Kouchi No.5. Zenchi No.8."
She use for each number a single hand sign and concentrate her energy.
The ground crack and the sand move up into a wave form and it falls down on the opponent.
Smaller stones and rocks can moved as well.

Soul Rescue (Forbidden Spell)
With this spell, she can send soul´s which must stay on earth, into the heaven.
She need for this a full moon night and the border line of a country.
The borderline of the country is set from the different god´s which are life in the country and not from the human´s.
Its mostly a river with a bridge.
First she need to offer the river ghost a bottle sake to make it calm.
Then she wait for the full moon night and must fulfill a special dance where she send her spiritual energy into the sky to open the gate and clean with her energy the air in the area.
The god´s of the country get through the additional energy problems into the spiritual atmosphere.
That is why this spell is forbidden and the normal punishment is to loose a part of the body like a arm.
Kuugen has the luck that she mostly loose her magic fur/hair.
She would be weak after this spell for around a week and need to use her magic only with spell´s.
Normal use is not possible in this time.

- Fur/Hair Wrist Band´s
She can use her fur/hair to make wristbands which she can track to the person which wear it.
Also she can use her blue fire breath to place a spell, which make the band into a green color.
A single time, a spell which aim to the person which wear this wristband get reflect complete.
The person which speak the spell is the new target of the spell and get full and complete hit, which is difficult to escape.
The spell cover the whole body for around 1 minute, but can each time get stopped from Kuugen.

Relationships with other characters: none