Hueco
Mundo is located between the Human world and Soul Society, though it is
separate from the bordering dimension known as Dangai. It can only be
accessed by tearing the dimensional fabric separating the worlds, which
allows Hollows to travel to any other dimension at will.[1][2]
Depending on the Hollow, the effect of this process varies. Regular
Hollows usually appear from a small black vortex or form out of smoke,
while Menos-class Hollows quite literally tear the sky apart to emerge.
Arrancar use a more stable variant of the latter technique known as
Garganta.
Hueco Mundo is also the location of Las Noches, the headquarters of Aizen and his recently-acquired army of Arrancar. 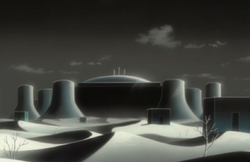 Las
Noches is a massive fortress which can be seen for miles in Hueco
Mundo. It consists of a main building with a domed center surrounded by
several large towers and smaller buildings. Atop the dome are six
smaller towers (or as they appear), which seem to contain areas such as
Aizen's throne room and the Espada meeting hall. Also, in the room
where Orihime Inoue is kept, there is one large Middle-Eastern rug on
the ground that is facing outside, much like those in rooms used for
Islamic prayer. Like everything else in Hueco Mundo, the main building
is colored white.
Also, according to the Arrancar Nelliel Tu Oderschvank, it takes about three days to move from one spot to a gate.