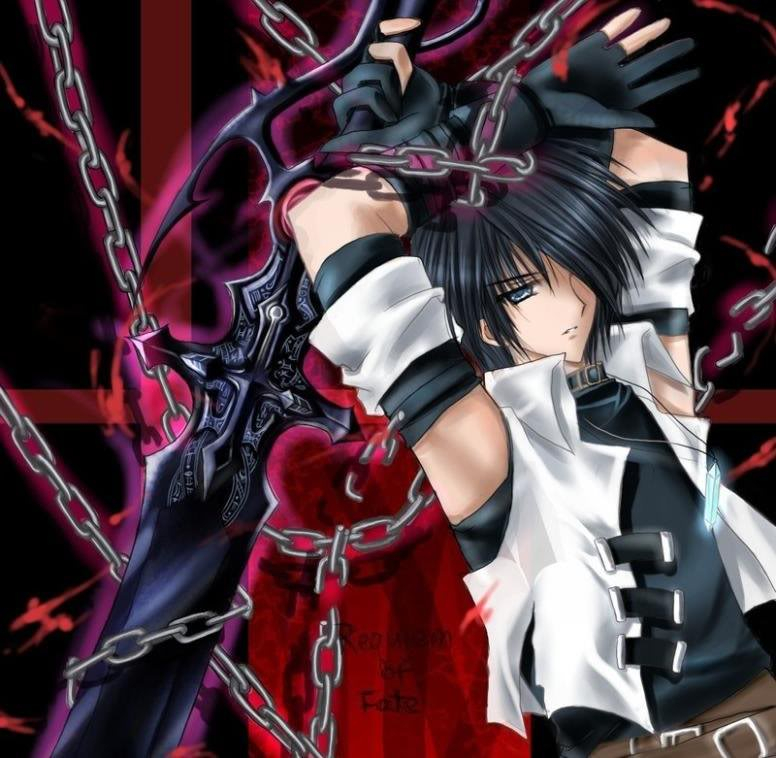 Biography:
Susumu also called Susu for short, was born in Konoha, and like many
other he was entered to the ninja academy, though he liked to stick his
head in the books instead of doing the physical traning, his body is
well built for physical use instead of thinking, but choose to focus
more on books, and diffrent jutsu, he easily got through the first exam
he had, as he was very adapt with the jutsu, and after he became Genin
he had also trained in using a big sword to fight with, giving him a
good physical advantedge in fights he and his team also got trough the
Chuunin exam as his skills surpased many, shortly after he became
chuunin there went by a few years, and he fell over a book called the
"secrets of creation" the book was about the basics of alchemi, and was
extremly old, Susumu began looking more intensily around the libary as
he had read the book for more like it, and began teaching himself the
basics of alchemy, and sometimes even went trough a whole night in the
libary to read books

Personality: Susu is a bookworm, he like to
read alot, and sometimes even forget about his bodys needs for food
water and sleep, as he gets chaught up in his reading, he is freindly
to other people, and has a hard time seeing the evil in others, even if
it is so outstanding on them, that everyone else would notice.

Abilities:
Weak alchemy: he can transmute lesser items into other things, like
turning a big piece of wood into a sword, though the mass of the
created item will equall the mass of the transmuted item, with greater
skill the mass can be less, and the use of a transmutation circle is
needed to ruin the normal eguality.

Items: crystal necklace, its potential is unknow to Susumu

Katon: Takitsuke
("Fire
Element: Fire Igniter") This technique utilized the very base theory of
all Katon techniques and used only as a basic survival technique in
order to light a fire for drying or cooking. Through the use of this
technique, the user focuses chakra into the tip of their finger and
places it against a combustible material, causing a small flame to
spark and then grow. The technique Hiakahou is much more efficient, but
due to Takitsuke's transferring through touch, it takes up very little
chakra to use. [E-Rank]

C-Rank:
Katon: Buki no Kouen
("Fire
Element: Flame Weapon") With this technique, the user is capable of
forming fire around their weapon by channeling chakra through it. This
causes the weapon to cause fire damage and generally setting highly
flammable clothing on fire in addition to damage caused by the weapon
itself.

Konoha Ryuu ~ Mikazuki no Mai
(Konoha Style ~ Dance
of the Crescent Moon) A sword technique which creates two clones that
attack simultaneously to confuse the opponent.

releationships:
knows a girl named Mika from the Libary, many of the days he was there
overworking on his research she came giving him a cup of coffe, and
gave him something to eat sometimes, as it has happend before that he
collapsed because he forgot to eat and drink.
she have looked him over the shoulders a few times to, to try and understand what he was up to.
_________________