He whispers but Hotaru tilts his head but shakes his head quickly.

Hotaru says when he looks up at the sky and sees that the four people in the sky slowly fly down.

Tsukiko looks up at him sadly and she hugs him tightly.

She asks but she looks at Hotaru confused again and then looks up at the four people that were falling.

Tsukiko thought aloud but her eyes widen in realization and a serious but angry expression goes across her face.

Natsu looks down and nods slightly but his eyes widen when he hears what Tsukiko says and he turns around with a serious expression while the Mibu Elders land on the ground.

He quickly stands up and takes the katana out it's sheath before he slowly walks to them.

"Kgh...""
"Hmph after all those years searching for one of them..I..finally found him!"

One of the Elders appears infront of Natsu and he takes out a needle.
Hotaru's eyes widen in shock.

The Elder stabs the needle in Natsu's neck and somekind of poisen goes into Natsu's body.

After that the Elder pushes Natsu away and he falls on the ground with his knees.

Tsukiko's eyes widen in fear when Natsu rushes to the four and she tries to stand up but her legs wouldn't cooperate.

She yells after him but she looks even more scared when she see's him stab Natsu and she stands up wobbly but fights to keep her balance and she takes out her swords.

"Stay away from him!"

Tsukiko shouts at them fearfully while she also rushes at them.

Natsu gets pushed to Tsukiko and he falls against her before he hits the ground.

He slowly closes his eyes and he shakes his head to stay awake.
Hotaru's eyes widen and he also tries to attack the four elders.
They all dissappear and reappear at each of his sides and punch him at the same time.

Hotaru's eyes widen in pain when he gets punched multiple times in his stomach before one of them kicks him in the face which sends him rolling on the ground.

Tsukiko's eyes widen in shock when they push Natsu towards her and she immediately drops her swords and tries to catch him but she falls backwards and hits her back against the ground which sends a spike of pain and she closes her eyes tightly with a shaken breath before opening them again with a fearful look in her eyes.

She asks in a quivering voice before looking up at Hotaru when they were about to punch him and a terrified expression goes across her face.

Natsu tries to keep his eyes open and he looks at Tsukiko with a small smile.

He slowly pushes Tsukiko off him with the same smile showing that everything will be alright while he tries to stand up.

Natsu blinks his eyes a lot of times when everything starts to flash brightly around him.

He looks around while he blinks his eyes and the Elders dissappear.
Suddenly a woman with blond hair and a pink dress pops up infront of him with red bright eyes and Natsu's eyes widen in shock and he stumbles backwards but when he looks around him again the woman's gone and the Elders are back.
It seems he had a hallucination.

Kyo yells in a confused tone inside Natsu's mind and one of the Elders laugh.

These words are whispered in Natsu's ear but no one's around him and he blinks his eyes again.

Hotaru quickly stands up and tilts his neck and loosens his shoulders. 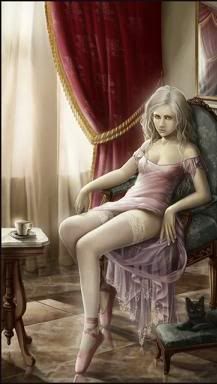 Tsukiko immediately turns her attention back to him when she hears him but she watches him worriedly when he pushes her away and she quickly stands up carefully so she wouldn't hurt her back.

She asks confused but she growls at the elders.

"Stop calling him that!!"

Tsukiko barks at them angerly before reaching for her swords but she suddenly remembers she drops them and she looks around for them worriedly.

Natsu looks around and keeps shaking his head.

He closes his eyes again and the Elders laugh.

"What's wrong?
Are I just gave you a psychic frequency."

One of the Elders said while laughing and Hotaru raises his eyebrow.

"So that's what you meant a few days ago.....you made Natsu as one of your..test subjects?"

Another Elder asks and the Elder that stabbed Natsu with the needle earlier laughs with a nod.

Tsukiko looks at Natsu surprised but she walks to him so that she is right next to him and she holds his hand.

She whispers in a soothing tone but she looks at the Elders confused and dumbfounded.

Tsukiko murmurs confused before looking at Natsu again worriedly. But her eyes widen again when they say "she" and Tsukiko glares at them.

"Who the hell are you talking about?"

Natsu puts his hand on his fore head and the Elders laugh.

"We're not going to tell you.
BUT...if you want to know what we're talking about..then come to the Mibu land!"

the Elders dissappear with a laugh but Natsu stays on the ground.

Natsu whispers while he gets more illusions.
Hotaru looks confused.

Tsukiko growls when she hears what they say and she gritts her teeth when she see's them disappear but she turns her gaze to Natsu with a worried and sad expression before kneeling in front of him.

She says in a calm and soothing tone before bringing his hand that she was holding to her cheek and she leans her head on it.

Tsukiko whispers before looking at Hotaru in the corner of her eye.

She explains in a slightly serious tone but quickly turns her attention back to Natsu and suddenly kisses his forehead.

Natsu looks down at the ground and when he looks around he sees everything on fire.

Hotaru nods with a worried expression.

"So...Natsu's seeing things that aren't there?"

Tsukiko's eyes widen in surprise at what Natsu says and she tightens her grip on his hand before looking at Hotaru with a sad expression but nods.

She says in the serious tone again before looking at Natsu worriedly again.

Tsukiko says in the soothing tone again but with a scared and upset expression.

Natsu closes his eyes and suddenly hears a girl humming a song.

He opens his eyes and suddenly the girl in pink looks in his face though she's also a illusion.
Natsu falls backwards with a scared expression but slowly calms down.

Natsu whispers when he sees everything's not on fire anymore and Hotaru slowly walks to the pair.

She asks in a hurt tone with a hurt and upset expression and she looks at Hotaru.

Natsu shakes his head and he blinks his eyes a few times.

He looks around with a worried expression.

"What's going to happen to me..it feels like I am going crazy."

Tsukiko looks at him sadly but she shakes her head.

"Your not going crazy.... it's only that your mind was not prepared for this..... ability and it's giving you illusions... once your mind is used to it and you have more control over this ability.... you will be fine...."

She says with a weak smile before looking down sadly.

"Why would they give this power to Natsu....? is it because he has some kind of connection for the person they're looking for...."

She suddenly asks sounding worried but she keeps her gaze at the ground.

Natsu nods with a worried expression.

He whispers with a confused expression.

I have no idea why this is happening..."

Tsukiko looks at him worriedly and she looks down sadly in thought.

She explains with a sigh before looking down worriedly.

Natsu looks down in thought and shakes his head.

Tsukiko looks at him worriedly and she tightens her grip on his hand.

She says with a warm smile before kissing his forehead again.

"I'll do whatever it takes to get you back to normal..."

Natsu looks up at Tsukiiko with a warm smile and slowly stands up.

He whispers with a soft smile.

Tsukiko tilts her head cutely with a nod.

She says with the warm smile before she stands up, walks where her swords were and she picks them up and she puts them in their sheaths before eyeing the city that is now in ruins with a pained and guilty expression before sighing with a weak smile.

Natsu nods with a sigh.

He whispers when he looks around.

Natsu says with a smirk.