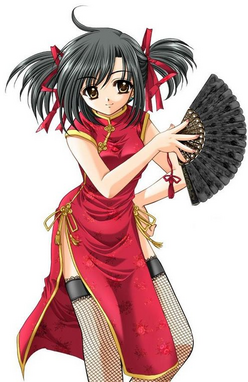 She has Very Long Hair but it can't be seen by the Ribbons she wears...

Personality:
Sweet but Shy, she's Smart but Only Shows her Nice Emotions, and Maybe Crying, her Past made her Tuck away the "Bad" emotions so she wouldn't feel any pain..

Biography:
she was born in a Normal Household with an older brother and a Twin sister and Lived a normal Life untill her 14th when they Found out her Older brother then 18 was a Vampire, who was killing half the Village, When he couldn't stop himself anymore he Killed her Parrents and Twin sister, after he Severely wounded Daniella, leaving her With 2 Scars from her Belly too her side But when he Finally Killed her Twin sister Something happened Making her Rip his head off,
She wanted too get help but the Villagers attacked her instead wanting too kill her, Then Kiyano Stepped in saving her, she had been with him now for 5 years, she never spoke exept too him, and even that Was Rare, rather Writing Notes showing that too people..