Personality:
Haru is a shy girl, feeling that the fact that she is a hybrid of human and animal makes her unwelcome and unwanted by either species. She tends to hide in the shadows so that she won't be rejected by people, the only person she is close to is her sister Kei, but being the only Chimera she knows makes her feel like a freak and hates how she looks in both animal and human forms. Due to spending the last twelve years in isolation she can also come across as innocent and childlike

Apperance:
both forms together (the chimera appearing shorter)

and in normal form 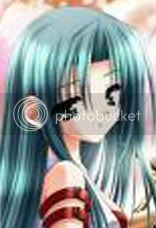 Attacks/Skills:
Animal form: (Chimera including Wolf/bird/horse/Dragon and cat) she's fast, stealthy and viscious.
Human form : She has basic martial arts training and is very good with a staff Static electricity manipulation. Though she has not yet discovered all of her abilities or attack due to being confined and controled in a the lab.

Items:
She carries nothing except kama with her because when she transforms she ends up naked so could potentially loose everything

Abilities:
she can transform into a chimera at will and manipulate nature (plants mainly)
she can also manipulate static electricity (lightening)
Fly and read minds
She is still learning what she can do so more might be added

Background:
Haruka was born as half human half dragon but at the age of four years she was involved in an accident that left her paralised and in a waking comba her parents agreed to allow scientists to experiment to save her life. Using a new DNA tecnique they combind her cells with that of numerous animals for different healing benifits, though the experiment went wrong and her animal half absorbed and adapted the new dna combining it all making her a chimera. she spent the next 12 years in a laboratory being tested to find out what happened and trying to reverse the effects. the scientists treated her as an object and for some she became a punch bag, they continuously told her that she was a freak that no one wanted and that she was discusting and ugly. Her Sister became worried about how she was being treated and rescued her as soon as he was able. She has spent the last three weeks on the run from the scientists and her parents who want to put her back in a cage to continue with their tests and experiments