Personality:
Kei comes over a little over confident sometimes and loves to tease, she can be rather perverted on occassion just to shock people, she is pretty much the opposite of her sister Haruka, who she is insanly protective of 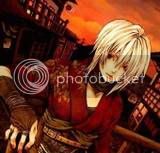 Attacks/Skills:
Animal form: Stealth and ferocity
Human form : She has exceptional martial arts training and is very good with a staff and all bladed weapons. she is also able to manipulate Static electricity and fire (unable to use abilites when in animal form)

Items:
She carries nothing but her fathers katana with her because when she transforms she ends up naked so could potentially loose everything

Abilities:
she can transform into a white tiger at will and manipulate fire and static electricity (lightening)
Reads minds

Background:
Kei was brought up in a loving household her parents suported everthing she wanted to do paying for her to go anywhere and do almost anything. Only when she turned nine did she find out she had a younger sister who was in a research center after treatment had gone wrong, after badgering her parents she was permitted to visit Haruka every week for the following year. on one visit she arrived thirty minute earlier and witnesses how Haruka was being treated she reported the abuse to her parents who as usual thought Kei was making it up, so she took things into her own hands. On her next visit she took advantage of a lapse in security and rescued her sister from the laboratory. She has spent the last three years on the run with Haruka and has no plans on returning home. She is trying to coax Haruka to improve her confidence