Race: One of the 4 Great Demon Kings (Youngest of the 4) (King of Torture) 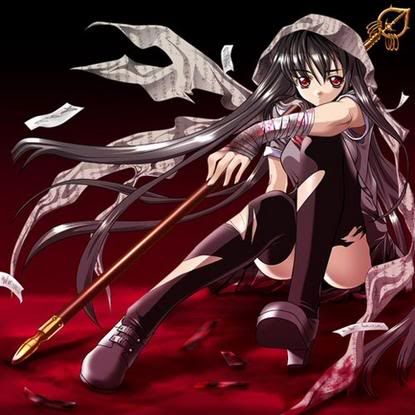 Biography:
Born
and Lived for a total of 3 minutes 12 seconds before Being Killed and
Sent too the Underworld by Ferosia, Who had Plans for her,
she was
Raised by him too Used her full strength...but Without a Doubt Noticed
that soon Ferosia wasn't as Kind as she First thought
At her First 5
years in his Care she was Giving Immense Power by him, and That was
Sealed by Barriers she would only learn too open
for short periods,
and after 21 years she could, at some point she Became one of the 4
great Demon Kings and she loved too play with people..
but even with this all she would never top over 3/10th the Full power ferosia had..
The
other two Demon kings wanted Ferosia gone, but they needed her too help
them, and Because she was the Weakest she was easely pursuaded,
They
set up a trap with a small boy but Thanks too Midari Hesitating at the
Last moment Ferosia wasn't killed by the boy's power but merely
Sealed inside him...
now she lives in Constant fear that Ferosia comes back...too kill them all..

Personality:
She's a Cheerfull Girl with a small temper, she would also hide Quickly
when someone more powerfull then Her would come,
even if she's
really bad in hiding..the moment you cross the line with her, she will
become a True Demon (in mind) and will torture you
till just before you die...patch you up and do it again...because you made her mad..

Abilities: She has the ability too Controll Minds too an Extend, she can make weak and Some average people do what she wants,
when she wants too she can break a total of 3 barriers which stop her from using her Full power...
she could become a Demon in Demon form but she has never done that before...only ferosia knows how she really looks..

Torture Chains:
These
Metal Chains will Come out of the Ground without a Hint, They will
entangle around the Target with Small Spikes Ripping through clothing
and flesh, making them Utterly painfull..

Mind Controll:
She
will Focus by Looking a Target in the eye's After some seconds her
Voice can be heared in Your mind and it would be harder and harder too
Controll your body...

Mind Disection:
she Would create an Illusion That will smell, look and Feel the Same as in the Reall world,
the Person would Feel There Body getting Stuck too the Ground and Somehow Not able too move a Muscle,
in
reallity you would Still move, The moment she touches you anywhere with
her Staff you will see a Cut Created there Slowly and in your mind it
would feel Like it's Actually happening..

Barriers Of Controll, Lust, Heaven:
these
tree barriers will open from 10% at no Barrier open too 30% at 1
barrier open too 60% at 2 barriers open too 100% at Heaven Barrier
opened...
(% is the amount of power unleashed..)

Relationships with other characters: Ferosia Gahireii is her Old Master, now she lives in fear for him...