Spoiler:
Before Konoha was founded, shinobi were merely individual clans working as mercenaries for various daimyo. Of the countless ninja clans, the Uchiha clan and the Senju clan of the forest were the strongest at the time. After much bloodshed, the Senju clan offered a truce with the Uchiha. Despite their leader, Madara Uchiha's, protests, the clan overruled him, and he reluctantly agreed. Thus the Hidden Leaf Village was born. Soon, other countries began to adopt this system, leading to the birth of other villages, and peace was attained. However, when the leader of the Senju clan, Hashirama Senju, was chosen to be the leader of Konoha, Madara decided to challenge him for the sake of his clan. No Uchiha, however, would help him, for they despised him for trying to reignite the flames of war. Betrayed by everyone, Madara left the village so that he could challenge Hashirama by himself.

During their legendary battle at the Valley of the End, Madara was defeated, presumed killed, and was thereafter lost to history. Hashirama's younger brother, who became the Second Hokage, formed the Konoha Police Force, and gave it to the Uchiha clan supposedly as a symbol of trust; in reality, it was so that Konoha could easily keep an eye on the Uchiha, and keep them out of Konoha's governing. Many of the Uchiha clan members, who figured out this gesture's ulterior motive, began to rebel like Madara had. However, it was too late; the Senju clan became superior in the entire village, and the Uchiha clan was discriminated and secluded, just as Madara had predicted.

Fugaku Uchiha, leader of the Uchiha clan, began forming plans for a coup d'etat. He placed his son, Itachi, in the ANBU as a spy for the clan, to act as a pipeline and feed the clan information about Konoha. However, Itachi, a pacifist due to the violence he had witnessed in the Third Great Shinobi World War as a child refused to be a part in the Uchiha's plan, he went to report the Uchiha's plan to the Hokage but it was too late, Fugaku (Itachi's father) was waiting for Itachi outside the Hokage's office, as Itachi approached the door Fugaku killed Itachi and in doing so gained the Mangekyo Sharingan.

Seconds after the death of Itachi, Fugaku walked into the Third Hokage's office and killed him, once again claiming that Konohagakure was now under his control and the Uchiha Clan where now the dominant clan in Konoha.

Spoiler:
You are a member of the now-thought-dead Senju clan and you're trying to reclaim the "throne" of Konohagakure, there will be many trials along the way, not least of which even avoiding the Uchiha Clan's many soldiers and forces (These will ALL be played by me, I will not participate in the Senju side of things but instead will play all the N.P.Cs). Every Senju members believes they are alone but it's possible that along the way they may find others of their kind.

Your character doesn't necessarily have to start in or stay in Konoha, they can go ANYWHERE in the Ninja world.

Fugaku, Uchiha is reffered to as the Shinshokage (Meaning the 'True Fire Shadow') and you must refer to him as such, concealing your identity when faced with any Uchiha members, most will have the Three Tomoe Sharingan but it is rare if not impossible that any will have the Mangekyo (Except fo the Shinshokage of course)

Character HAS to be over 16 years of age.

Spoiler:
The Senju clan (千手一族, Senju Ichizoku) was considered the strongest clan in the world during the war-torn era before the founding of the hidden villages. Together with their rivals, the Uchiha clan, they were responsible for founding Konohagakure and making the village into what it is today.

History:
The Senju clan was descended from the younger of the two brothers chosen by the Sage of the Six Paths to inherit the way of the ninja. He was born with the "body" of the sage, and he believed that love was the key to peace. This led to the sage choosing him as his successor causing his older brother to attack him out of hatred. Eventually, the Uchiha clan was descended from this older brother and resulted in the bitter rivalry of the Senju and Uchiha.
The Senju clan gained their fame in the era before the founding of the hidden villages. Where other clans focused on mastering one particular skill, the Senju were masters in all skills, from ninjutsu, to taijutsu, to genjutsu. Because of this, they were feared as "the clan with a thousand skills" (「千の手を持つ一族」, "sen no te o motsu ichizoku"), which gave them their name Senju (千手, "a thousand skills", "a thousand hands").
The most famous member of the clan was their leader, Hashirama Senju. His unique Wood Release ninjutsu even gave the clan the nickname the Senju clan of the Forest (森の千手一族, Mori no Senju Ichizoku). This Wood Release, and his ability to control the tailed beasts, made him the greatest shinobi of his time.
The Senjus' place at the top of the shinobi world was undisputed, but there was one clan that was able to stand up to them: the Uchiha clan. Whenever one country hired the Senju, their enemies would hire the Uchiha, and vice versa. This led to a rivalry between the two clans and, more specifically, between the leaders of the clans, Hashirama and Madara Uchiha.
However, in a world of constant bloodshed, Hashirama had a dream of peace, and a great love for his fellow men. Known as the "Will of Fire" (火の意志, "Hi no Ishi"), this belief made the Senju clan propose a truce to the Uchiha clan. Weary of fighting, and persuaded by Hashirama's great charisma and negotiation abilities, the Uchiha accepted, ending their bloody rivalry. Only Madara was against this truce, believing the Senju would one day destroy the Uchiha clan. He was forced to accept, but his humiliation wouldn't end there.
Some time after the alliance between the Senju and the Uchiha was signed, the Land of Fire hired them to stabilize its borders, and the clans created a permanent settlement within the country. Thus, Konohagakure was founded, and, with it, the system of one Hidden Village per country. As the system spread throughout the world, the constant violence stopped, and Hashirama's dream began to become a reality. But it would soon start anew after Hashirama was elected as the First Hokage; a move Madara felt was a humiliation, and made him decide to leave the new village, eventually returning to attack it.
Throughout the years, the Senju retained their supremacy over Konoha, and made the village into what it is today. After the First Hokage's death, his younger brother, Tobirama Senju, stepped up to become the Second Hokage. Although likely not a Senju by blood, Hiruzen Sarutobi, who would become the Third Hokage after the Second's death, was trained by both the First and Second. His successor, Minato Namikaze, was the student of Jiraiya, who was a student of the Third. Tsunade, the Fifth Hokage, was not only a student of the Third, but the granddaughter of the First and the grandniece of the Second. All of them strongly held to the Will of Fire philosophy.
It is unknown if the Senju clan currently still exists as an organization. There are no known people with the Senju name currently alive, although the Fifth Hokage, Tsunade, might be an official Senju. It is very possible that the Senju clan disbanded into smaller clans and families, especially since they never had a specific skill or technique like the Uchiha or Hyuga clans. However, their legacy lives on strongly in the hearts of the people of Konoha. 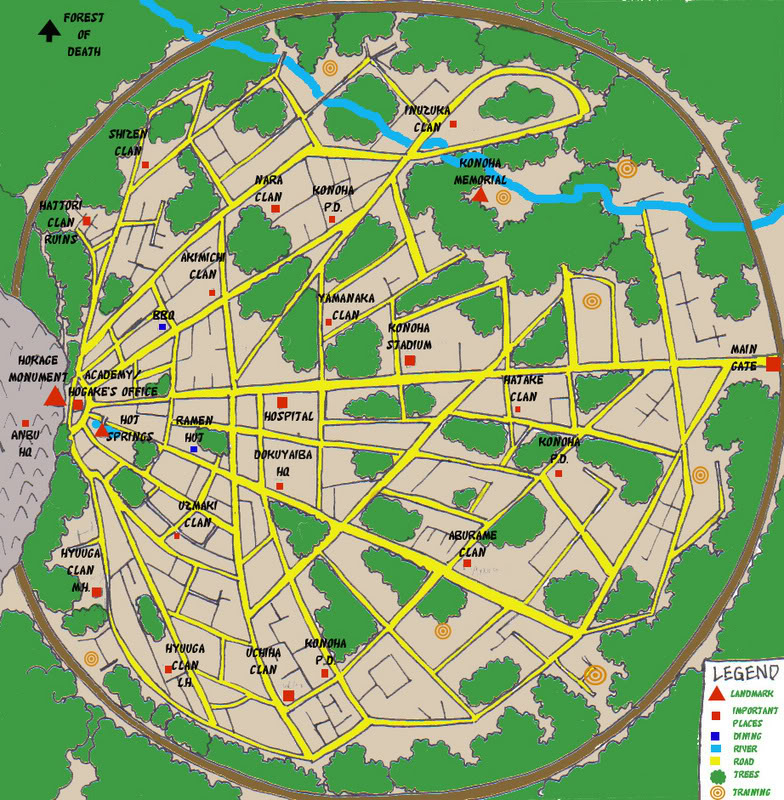 Spoiler:
You can have only wood, water and lightening style Jutsu (Though not necessarily all three, please be sensible with this) with a Maximum of 20.

Spoiler:
Wood Release (木遁, Mokuton; English TV "Wood Style") techniques combine earth and water-based chakra to create wood. Wood Release techniques can be produced from anywhere, including the user's body, as the user's chakra is literally converted into a source of life. Hashirama Senju was the originator of this ability, evidenced by the fact that none of his relatives have been shown capable of using Wood Release. The First's ability to use these techniques was the reason for him being given the title of Hokage, and with Wood Release Secret Technique: Birth of Dense Woodland he was able to grow the trees that served as the foundation of Konohagakure.
Orochimaru, in his quest to harvest the First's abilities, injected his DNA into 60 test subjects, and out of the 60 only Tenzo survived. This gave Tenzo the Wood Release abilities. However, he is not as masterful as Hashirama.
A possibly unrelated technique, but unique to the First and Yamato, is the Hokage-style Sixty-year-old Technique - Kakuan Entering Society with Bliss-bringing Hands. This technique produces a seal "sit" (座) on the user's hand that can suppress a tailed beast's influence over its host. This is done by producing wooden dragons from the ground that attach to the host and force the tailed beast's chakra to recede. The First Hokage's Necklace aids in this technique's execution, but its exact role is unclear.


Rotation!
NathanCX - Will post when necessary, this could be at any time